This blog entry is about the Midtown neighborhood of Little Ethiopia. I was accompanied on my adventure to the hood by Aussie filmmaker, Diana Ward.

Little Ethiopia is a small, one block stretch in Midtown’s Carthay district. It’s situated along Fairfax between Olympic Boulevard and Whitworth Drive. It’s the smallest of the Southland’s’ many ethnic enclaves. It exists within the borders of Carthay Square with Picfair Village to the southeast, Carthay Circle to the north, Miracle Mile to the northeast and Wilshire Vista to the east.

The area that is now Los Angeles’ Midtown area spent several thousand years as Tongva land. It was later conquered by Spain, claimed by Mexico and subsequently invaded by the US. Even after the discovery of oil in the area in the 1890s, the area between Los Angeles and the Pacific coast remained largely undeveloped pasture and farmland until the 1907 opening of the Port of Los Angeles and the 1913 completion of the Los Angeles Aqueduct, which both made large scale industrialization possible.

Development of Carthay began in 1922, when J. Harvey McCarthy began building along the San Vicente Boulevard line of the Pacific Electric Railway. The area south of Olympic was developed in 1933, by Spyros George Ponty. Like much of LA, Carthay was originally off limits to non-whites. In the 1920s, the area around Brooklyn and Soto in Boyle Heights was home to the largest number of Jews west of the Mississippi. After the conclusion of World War II, many of Los Angeles’ whites moved to the suburbs. At the same time, Jews began to flock to Fairfax, which was nicknamed “Kosher Canyon” and “The Bagel District.” The area south of Olympic was known, less colorfully, as “SoFax.” There aren’t currently statistics available only strictly for Carthay Square or Little Ethiopia, but today the greater Carthay District is approximately 58% white (mostly Jewish and Russian), 16% Latino (mostly Mexican), 9% Asian (mostly Korean) and 13% black… largely Ethiopian. 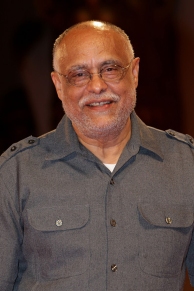 Los Angeles is home to large numbers of African-American immigrants. The main populations are Egyptian, Ethiopian, Nigerian, Moroccan and South African. For whatever reason, the only African immigrant populations to cluster together in tightly-knit ethnic enclaves are Ethiopian. The first Ethiopians visited the US after the coronation of Emperor Haile Selassie in 1930, who sent young Ethiopians to study abroad (although not to Los Angeles).

Ethiopian immigration increased in the early 1970s, after the USSR began arming, and Cuban soldiers began assisting Ethiopian communists in their war against Selassie. In 1974, Lt. Col. Mengistu Haile Mariam toppled the government. Emperor Selassie died on August 22, 1975 — allegedly strangled in the basement of his palace. In the midst of this disarray, Eritrea continued its struggle for independence and in 1977, Somalia attacked. A period of repression, torture and murder of perceived enemies of the government followed, in what became known as “The Red Terror.” Hundreds of thousands of Ethiopians “disappeared.” Many others fled the country, mainly to Khartoum, Sudan. The first significant numbers of Ethiopians immigrated to Los Angeles at the same time. However, whereas the passage of the Immigration and Nationality Act of 1965 most significantly raised the cap on the number of Asians allowed to immigrate to the US, it did nothing for Africans. It’s telling that, of all the Southland’s ethnic enclaves (Cambodia Town, Chinatown, Historic Filipinotown, The Korean District, Koreatown, Little Arabia, Little Armenia, Little Bangladesh, Little India, Little Osaka, Little Saigon, Little Taipei, Little Tokyo, Tehrangeles and Thai Town), all but Little Ethiopia represent groups from Asia.

In 1980, the Refugee Act was passed and was the first formal policy dealing with African refugees. However, the cap was set at 1,500 per year for the entire continent — probably because of the perception that we benefit less from African immigration than Asian or European. Despite the widespread racist stereotype of the “model minority” forced upon East Asians, African immigrants actually have the highest educational attainment of any immigrant group in the United States. From 1982 to 1994, Ethiopians made up the largest group of African-American immigrants. The largest number of Ethiopians settled in Washington, DC. The next largest number settled in Los Angeles. Drought, warfare and famine in the 1980s affected around eight million Ethiopians, killing one million. At the same time, Tigray and Eritrean insurgencies stepped up their violent struggle for freedom. Even though the famine ended a quarter of a century ago, images of starving Ethiopians continue to be the predominant stereotype for many Americans.

THE BEGINNINGS OF LITTLE ETHIOPIA

Nowadays, Los Angeles is home to roughly 96,000 Ethiopians. According to wikipedia, Little Ethiopia is home to the bulk of Los Angeles’ Ethiopians. The fact that the entire Carthay district is only home to 5,120 Angelenos suggests that perhaps not every statistic found on the web is accurate. A couple of hours spent in Westchester and Inglewood suggest that a lot more Ethiopians live over there. However, Little Ethiopia is along the lines of Koreatown, Little Tokyo and Thai Town, a not especially residential neighborhood but rather the cultural and commercial heart of the people who founded it. By the turn of the millennium, people were referring to the area by several unofficial names including “Ethiopian Restaurant Row,” “Little Addis,” and, most commonly, “Little Ethiopia.”

Driving through the neighborhood, it was impossible not to smell wat, incense and coffee, to hear music bumping and to notice the numerous signs in Ahmaric. Huell Howser filmed an episode of Our Neighborhood titled “Little Ethiopia” with Meron Ahadu acting as his tour guide.

In 2002, Merkato’s Dawit, Nile Travel’s Meshesha Biru, Messob’s Birhanu and Getahun Asfaw, and Rosalind’s Fikre approached the city about getting the area officially designated “Little Ethiopia.” The move was unanimously approved. One of the first things the neighborhood did was throw a street festival co-hosted by Ethiopian-American actress Senait Ashenafi. About 5,000 people showed up. Today, every September there’s still the annual cultural festival.

Ethiopian Cuisine, along with Moroccan, is one of Africa’s widely recognized world class cuisines, standing shoulder to shoulder with French, Greek, Indian, Indonesian, Italian, Japanese, Mexican, Persian, Peruvian and Vietnamese (Thai is still the best). The most characteristic dishes include injera (the sourdough flatbread that doubles as an eating utensil in Ethiopia, Eritrea, Somalia and Yemen) and various wat — a variety of thick stews with a complex variety of uncommon spices and seasonings. Since most Ethiopians are Jewish, Muslim or the sort of Christians that actually follow Biblical dietary restrictions, there’s no hog. In fact, for vegetarians and vegans, Ethiopian food offers a vast array of options. For meat addicts, there’s tibs, kitfo and gored gored. Fitfit is a popular breakfast dish and mead-like honey wine is a popular beverage. In August, Little Ethiopia hosts the Lil Taste of Ethiopia.

The coffee ceremony is pretty complicated. Coffee originated in Ethiopia so they’ve got it down. I’m pretty sure only Vietnamese do coffee better (with apologies to Italy, Thailand and Turkey).

Even older than the cultivation of coffee is the cultivation of qat (or chat), a plant which contains an amphetamine-like stimulant which causes excitement, loss of appetite and euphoria when chewed. It’s traditionally taken by men and women in sexually segregated groups. It’s also fed to farm animals to give them an extra push.

Ethiopian music began really taking off with non-Ethiopians in 1997, when Buda Musique released the first volume of the now popular series, Ethiopiques. The compilations focus almost exclusively on music produced in the ’60s through the end of Haile Selassie’s reign in 1974. The era was truly a golden age of Ethiopian music but I can’t help find distasteful the retro-fetishistic, authenticity obsessed, narrow-minded cultural watchdog attitude of label owner Francis Falceto (and, to be fair, most Western listeners). If he wants to steer Ethiopians away from cheap synthesizers back to “real” instruments, perhaps he should use some of the proceeds from his series to buy them.

For those not prejudiced against music actually popular with Ethiopians, and not yet appropriated by westerners (wait 40 years), Little Ethiopia’s Merkato Market and Carthay Square Market sell numerous contemporary CDs and cassettes.

Jah Lambs and Lions focuses on reggae (again, the modern kind, not the kind frat boys listen to in dorm rooms).

Ethiopia isn’t a international powerhouse of African Cinema like Algeria, Burkina Faso, Egypt, Mali, Nigeria, Senegal, or South Africa. It’s more comparable to the modest cinemas of Cameroon, Congo, Cote d’Ivoire, Gabon, Guinea, Kenya, Mauritania, Mauritius, Morocco, Niger and Tunisia — primarily directed at its own citizens and those in the Diaspora. In fact, at Amoeba we’ve only ever stocked one Ethiopian film, a documentary called A Walk to Beautiful and the only Ethiopian film that I’ve seen was at the Pan-African Film Festival, about two male friends… the name unfortunately escapes me.

To vote for any communities you’d like to see covered in California Fool’s Gold, name them in the comments. If you’d like a bit of inspiration, there are primers for:

Art prints of Brightwell’s maps are available from Saatchi Art and 1650 Gallery. Other merchandise is available on Tee Public.