Although the earliest office parks first appeared in the 1950s, their golden age was the 1980s, when they sprang up like boxy, shiny, fairy rings in the liminal spaces between cities and suburbs; drawn beyond the edges of cities by baby boomers who’d discovered in fleeing to the suburbs, they’d created for themselves a fresh hell in the form of a daily commute. Lucky for them, their jobs were often willing to follow them.

Just as the office park’s natural environment is the region adjacent to both city and country, so too are their architectural inspirations. On trips to St. Louis as a child, the welcomed me like coming attractions before the urban feature presentation. Like the cities they surrounded, the office park profile — though low — was higher than most structures in suburbia. Usually built in the faceless Corporate International or Late Modern styles favored by developers of downtown financial districts, they looked a bit like short, stocky, cities in miniature. The landscape of the office park, on the other hand, seems more inspired by the university campus, with large, manicured lawns. They also invariably feature vast, sprawling parking lots of the sort familiar to all country and small town folk.

Having never worked in an office park, I suppose I have a different relationship with them than I assume do the workers within. I’ve never had a job in a cubicle, surrounded by (but isolated from) coworkers by flimsy walls decorated with family photos, a calendar, and particularly appropriate Dilbert comic strips. I’ve never had a job where I was encouraged to participate in Casual Fridays; in fact, when I worked at Amoeba Music I instigated Anti-Casual Fridays in which I encouraged co-workers to dressing up, rather than down, was more rebellious. There have been a few occasions on which I’ve been to office parks on visits… and I did watch The Office and Enlightened.

Most of my experience with office parks, though, has come when they’re not in use — which is most of the time. Before the workers arrive and after they leave, office parks sit empty — uneasily tranquil and vaguely threatening, their well lawns and fountains as lifeless and undisturbed as, say, the Chernobyl Exclusion Zone. I’ve always found their austerity attractive, producing in me an effect akin to the art of the anti-expressionist Neue Sachlichkeit movement. When I was young I occasionally raided the flower beds of office parks to decorate a vase on my kitchen table. Once I used a large office park lawn to play laser tag with friends. More often I snuck onto them to enjoy a picnic — never once troubled by a security guard although always on the lookout. For me, trespassing in an office park made me feel a bit like Number 6 on The Prisoner had be been attempting to infiltrate the Village instead of escape it.

Nowadays office parks are, like mini-malls, increasingly regarded as suburban blight —  unloved relics of the car-dependent 20th Century. This is especially in the rare instances when they’re located on prime city real estate in the center of a city. Not only do they stand out like a sawed off stump in a grove of trees, they and their sterile, anonymous, aesthetics have largely been rejected as “inauthentic” by a generation which have rejected the pleated slacks and golf shirts for an even less flattering uniform of hooded sweatshirts, tattoos, untucked button-up shirts, and sock-less feet exposed by rolled up trousers.

Naturally, the owners of office parks have begun to employ the adaptive reuse strategies to these unloved properties to make them appealing to the bourgeoisie who’re now returning to city centers, unsure why their parents and grandparents ever left. For most yuccies, it might take as little as removing those acoustic drop ceilings, putting a ping pong table in the break room, and getting some mismatched furniture. It can also mean more significant changes, such as improving bicycle, pedestrian, and public transit infrastructure; rezoning to add residences and shops; or making profound structural or landscape improvements.

THE GARDEN IN THE CITY

While most office parks are situated in the exurban hinterland, in Los Angeles there’s one office park situated at the edge of Downtown, sandwiched between the cities tallest high-rises and the terminally congested 110 Freeway. While its suburban charms were chief among its selling points in the 1970s, it seems especially out-of-place and out-of-time in the Downtown landscape today, despite newly added “Millennial bait” touches. Among the least significant changes is its new name, Park DTLA. For most of its history (and according to most of its signage), it’s referred to as Figueroa Courtyard.

If an office park within a downtown seems incongruent, it was probably less so in 1978, when most of Bunker Hill had stripped bare in the name of “slum clearance” but had yet to see much in the way of redevelopment. If the developers of garden apartments envisioned their creations as apartments inside parks, or villages inside cities, the developers Figueroa Courtyard seems to have viewed their project similarly. Before a name had been settled on, the project was referred to in various sources as “the Garden,” “the Park,” and “the Park Garden offices.” In a 1979 Los Angeles Times interview, the leasing company’s senior vice president Dan Matlow boasted “The Park will prove popular not only for offices but for lunching and dining because of its casual outdoor low-rise atmosphere in the midst of fully landscaped gardens.”

As it was being developed it initially looked like the first tenant would be the Los Angeles branch of the Pacific Stock Exchange, and the office park was designated “Exchange Square.” The stock exchange backed out before completion, opting to remain on Spring Street where it had been since 1931 and where it remained until its trading floor was closed for good in 2001. When the office park was completed in 1979, it was dedicated the Gilbert W. Lindsay Mall. Lindsay was a one-time City Hall janitor from Mississippi who had worked his way up to become Los Angeles’s first black city councilman. For whatever reason, the “Gilbert W. Lindsay Mall” designation was then re-assigned to an alley in Little Tokyo. The office park then became Figueroa Courtyard, which most still know it as, if they know it at all. 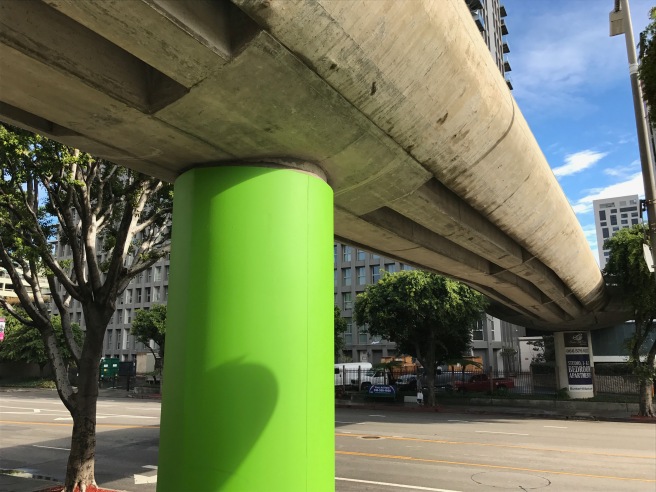 Although never completed, another relic of the 1970s connects the Figueroa Courtyard to the older Bunker Hill Towers and the largely vacant World Trade Center (built in 1968 and 1986, respectively) — the Calvin S. Hamilton Pedway. The pedway was part of a planned, automated people mover system presented in 1970’s Concept Los Angeles: The Concept for the Los Angeles General Plan by the city planning director, Calvin S. Hamilton. Hamilton’s Concept Los Angeles recommended radical changes to the city’s zoning laws, removing businesses from the boulevards of residential neighborhoods and clustering them together in separate business and commercial centers like Century City and Warner Center. Concept Los Angeles was adopted by the city in 1974 but was dependent on federal funding and newly elected president Ronald Reagan pulled the plug shortly after taking office in 1981.

The slow, ongoing redevelopment of Bunker Hill has now taken entered its 62nd year and is still has years to go before it’s likely to be completed. After the Victorian mansions which formerly covered Bunker Hill began to be demolish, the city lifted the 150 foot (46 meter) building height limit was lifted in 1957. Developers swooped in, seeking in most cases to replace the previously residential neighborhood with high-rise skyscrapers. In the 1970s, five office buildings, ten residential towers, and one hotel, the Bonaventure, were constructed… including the squat, two-to-five story Figueroa Courtyard. Development really took off in the 1980s, when eighteen more large projects were launched. Nowadays, the strangeness of an office park in the middle of a high-rise development is even more glaring, like the 19th Century firehouse belong to Grandma Steinmetz in the 1974 film, Herbie Rides Again. 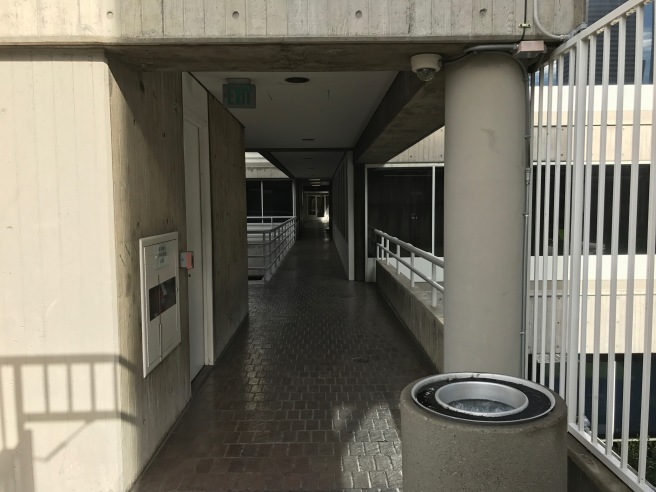 Unfortunately for the would-be-explorer, Figueroa Courtyard is protected by an absurd level of security. On the several times that I’ve walked along the mostly lifeless sidewalk to or past this office park, it appears largely vacant. I’ve never seen anyone sitting at a bench, having a smoke, or walking along a walkway. Nevertheless, bars block most entrances, signs warn against trespassing, and suspicious security guards follow pedestrians onto public sidewalks suggesting the presence of some high risk soft targets within and giving the complex the appearance less of a park than a prison.

A few seconds of online research reveals that tenants include the UCLA Extension Downtown Los Angeles Campus, 8th Light [thanks Machiko], American Public Media, StubHub, Los Angeles Limousine Service Lifestyle, Millwood Ranch Company Ltd., and a FedEx/USPS/UPS Drop Off. According to several sources, as of the 2015 sale the office park was in fact only 28% vacant. The bars, cameras, and security guards are part, perhaps, of Mike Davis characterized as “Fortress L.A.” — essentially, a the destruction and privatization space which has only the appearance of public space… albeit rarely, if ever, used. 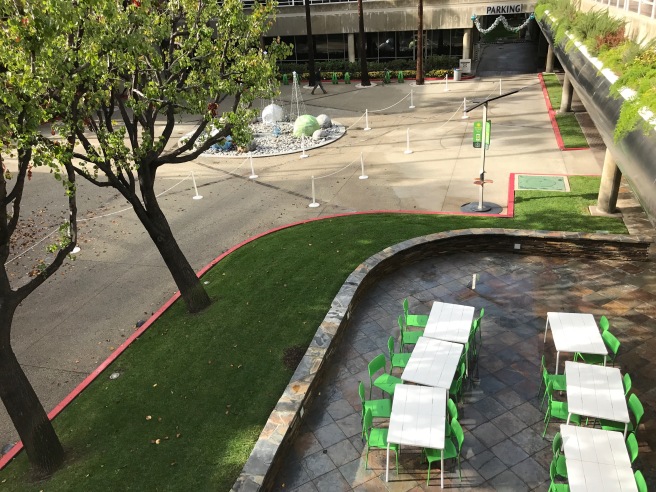 According to the website of the Los Angeles County Assessor, the first substantial renovations to Figueroa Courtyard took place in 1981. The second round of renovations were announced in 1998, shortly after the Los Angeles County Bar Association relocated there from the beautiful, Walker & Eisen designed Oviatt Building on Olive Street. The renovations were designed by the Westwood-based Chelsea Design Group and the Sawtelle-based firm of Carter Romanek Landscape Architects.

This was, coincidentally, two years after the release of Chris Smith‘s American Job and a few months before the release of Mike Judge‘s comedy, Office Space — both of which pointedly skewered the culture of office park work. The 1990s upgrades were limited to mostly cosmetic changes, such as the planting of non-native bougainvillea and palms; the installation of rock gardens, sculpture, and fountains; and upgraded T1 internet connection. No word on if or how many TPS reports were processed in the years that followed.

Park DTLA is situated atop a 1.86 hectare plot of freeway adjacent land and 61% of the office park’s property is rooftop. If Figueroa Courtyard were really to be transformed into something legitimately modern, green and warranting the descriptors “garden” and “park,” a mix of solar panels and green roofs would have a lot more impact than murals. Another failing of the complex is the fact that it’s largest building is a multi-story parking garage and the only green transit is provided by MetroMetro’s 33/355 , 60, and LADOT’s DASH Downtown A bus lines. Construction is currently underway for the 2nd Street/Flower Street subway station so, with 28% of the building vacant and residential vacancy rates in Los Angeles being only 2.7%, converting that hulking car park into residences would be an actual upgrade to get excited about. In the meantime, despite hype about “park gardens,” the “downtown renaissance” and a new name, Park DTLA still feels — for better or worse — a unmistakably 1970s vision of tomorrow.

Eric Brightwell is an adventurer, writer, rambler, explorer, cartographer, and guerrilla gardener who is always seeking writing, speaking, traveling, and art opportunities — or salaried work. He is not interested in generating advertorials, clickbait, listicles, or other 21st century variations of spam.

Brightwell has been featured as subject in The Los Angeles Times, Huffington Post, Los Angeles Magazine, LAist, Eastsider LA, Boing Boing, Los Angeles, I’m Yours, and on Notebook on Cities and Culture. He has been a guest speaker on KCRW‘s Which Way, LA? and at Emerson College.

Art prints of Brightwell’s maps are available from 1650 Gallery and on various products from Cal31.