The other night I went to the Stardust Club in Downey to see San Francisco Bay Area band, Starry Eyed Cadet. Before leaving home, I was fairly sure that I’d been to the Stardust before previously to see Zip Code play there.  As I got closer, heading down Firestone Boulevard, I was certain that this was the place. There was something memorable about the bar, even though at first glance it appears to be a fairly run-of-the-mill suburban strip mall saloon. Paying closer attention my eyes were drawn to the weird, indoor shingles and the old-fashioned sparkly ceiling. Then there’s the name — Stardust — which echoes that of a celebrated Las Vegas resort but seems somewhat incongruous when applied to a dingy, Downey dive. I decided to delve into its history for another edition of Swinging Doors.

The Stardust Club, in its current state, is a fairly n bar in Downey‘s Orange Estates subdivision. It is situated inside of a strip mall called the Firestone Center, which has a pleasingly ostentatious sign.

The strip mall’s architectural design includes rough rock walls — a look that I think of as Stone Age Modern. My guess was that it was built around 1958 and my hunch was correct. It was completed the following year, in 1959. That happens to be the year after the Las Vegas Stardust opened. An ashtray from the Downey bar uses the same font as the Vegas Stardust and for those reasons I assume that Downey’s Stardust was named in homage to Las Vegas’s.

I couldn’t find the Downey bar’s opening date but it was in operation at least as early as 1961, when it was known as the Stardust Lounge. It was owned and operated by two brothers — Ray and Johnny “the Downey Flash” Ortiz. The Ortiz brothers were athletes and sports enthusiasts and the Stardust Lounge was a sports bar. Two television sets broadcast sporting events, there was a modest amount of sports paraphernalia, and the bar catered to athletes who, in many cases, were introduced to the bar by Los Angeles Herald-Examiner sports editor, Bud Furillo. Thanks in part to Furillo’s efforts, Stardust regulars included baseball stars Mickey Mantle and Yogi Berra; American Footballers Johnny Unitas, Marlin McKeever, and Roman Gabriel; and boxer Jerry Quarry.

A postcard from the Stardust Lounge

In 1964, a conflict between Gino Marchetti of the Baltimore Colts and Frank Ryan of the Cleveland Browns — both of whom were in town to play at the Pro Bowl Game — nearly got out of hand, which furthered the Stardust’s reputation as a sports bar. It also garnered it a degree of notoriety. In 1967, after the Los Angeles Rams moved daily operations to Long Beach‘s Blair Field, some of the Rams settled in the area — but coach George Allen let it be known that he was not at all happy with his players patronizing the bar.

The Stardust crew also did their best to attract female patrons at a time when it was just becoming popular for single women to patronize bars. The clientele composed largely of athletes and single women probably accounts, in part, for the Stardust’s appeal with Hollywood actors like Henry Fonda, Robert Mitchum, and Steve McQueen. That it was located deep in suburbia and far from the prying eyes of the paparazzi probably didn’t hurt either. Downey, in many ways, is the quintessential Southern California suburb. It was one of those places where orange groves had been bulldozed and single-family homes hastily erected in their place. It’s where Taco Bell was born and is still home to the oldest McDonald’s still in operation. Downey Records recorded local acts who made music in the garage rock, hot rod, and surf rock styles.

Some people romanticize the mid-20th century as a sort of golden age of suburbia but naturally, there was a dark underbelly which sometimes revealed itself at the bar. In the early hours of New Year’s Day, 1965, a group of four armed men attempted unsuccessfully to rob the Stardust after hours. Johnny Ortiz was shot but not seriously injured.  The Southeast News & Downey Champion reported on the incident with a piece titled “4 Men Mess Up Attempt to Rob Cocktail Lounge.” It was also colorfully recounted in Ortiz’s memoir, My Life Among the Icons: A Fascinating Memoir of a Raconteur Whose Life Intersected with the Giants of Sports and the Glamour of Hollywood. The criminals were Lewis Donald Fritz of Compton, his brother Phillip W. Fritz, and their accomplices Teddy M. Primrose and Dwain C. Patella. The car, which was abandoned after the gas tank fell out, was easily traced to its owner, Lewis.

That incident brought the Ortiz brothers into contact with Jack Kirschke — a deputy district attorney and an officer in the Long Beach Yacht Club. Ray invited Kirschke to the Stardust and he soon became a regular, along with his wife, a former model and fashion designer named Elaine. Jack and Elaine reportedly had an open marriage and an arrangement that allowed them to pick-up dates at the Stardust, even when their spouse was present. As part of their understanding, dates would spend the night in the couple’s bed whilst the other spouse would spend the night in their yacht, moored in a canal behind their Naples home. On 8 April 1967, the bodies of Elaine and her flight instructor, Orville “Bill” Drankhan, were discovered in the couple’s bed. Jack claimed he’d been at the Stardust — the one in Vegas. The crime was recounted in James Judd‘s 1968 book, Dawn of doubt; the Jack Kirschke murder trial. The night before the verdict was read, Kirschke was honored with a party at the Stardust in Downey. The next day, however, he was found guilty of two counts of first-degree murder for which he ultimately served twelve years in prison. Upon his release, he apparently stopped by the Stardust once again.

While Jack was awaiting trial, Johnny had sold his share to Ray and opened an “expansion club,” the Lancer Lounge, with Bud Furillo. Like the Stardust, it was a sports bar. It was also located in Downey. Unlike the Stardust, however, it closed sometime after 1974.

The Stardust made another appearance in another true crime with Vincent Bugliosi‘s Till Death Do Us Part (1978). That book detailed an incident in which an ex-police officer, Paul S. Perveler, murdered his wife and his mistress’s husband for $100,000 in insurance money… and likely so that the two lovers could be together. It’s somewhat less clear what role Perveler’s mistress, Kristina Cromwell, played in the murders but Bugliosi describes her as frequenting the Stardust (she lived nearby on McCallum Street). In 1969, both were found guilty of murder although Cromwell was released from prison in 1976.

Although it hasn’t yet appeared in any true crime works, in November 1983, (following a robbery in Inglewood and shooting in Huntington Park), four teenage members of the East Coast Crips [from South Los Angeles’s Eastside] robbed a trio of musicians who were loading their equipment in front of the Stardust. When then-23-year-old Tracey Bennington of Bell exited the bar, they nabbed her too. Patrolling officer Charles Baptista witnessed the crime, called for back-up, and a chase ensued which ended with the Crips’ (stolen) vehicle overturning in Compton.

Real change came to Downey with the end of the Cold War in 1991. With the reduced threat of nuclear annihilation, military spending was reduced and defense jobs were cut. Rockwell International, one Downey’s largest employer, closed in 1999. The Anglo population declined and the Latino population grew. Today the suburb’s largest employer is Kaiser Permanente and Mexican-Americans, once a minority, comprise more than 70% of the town’s population. Today’s substantial minorities include non-Latino whites, Salvadorans, Filipinos, Koreans, Cubans, and Guatemalans.

Manuel “Manny” Gutierrez” bought the Stardust in 1994 and it seems that Ray Ortiz then retired. He died of pancreatic cancer on 20 February 2004, at the age of 72. Perhaps the change in owners accounts for the change in name to “Stardust Club” as well as it’s shift in focus from sports lounge to live music venue. Today, music is mostly provided by unsigned local bands, tribute acts, DJs, and karaoke. There’s, also, of course, an internet jukebox. The walls are covered with vinyl promotions for Anheuser-Busch products — but there are no longer any beers on tap. 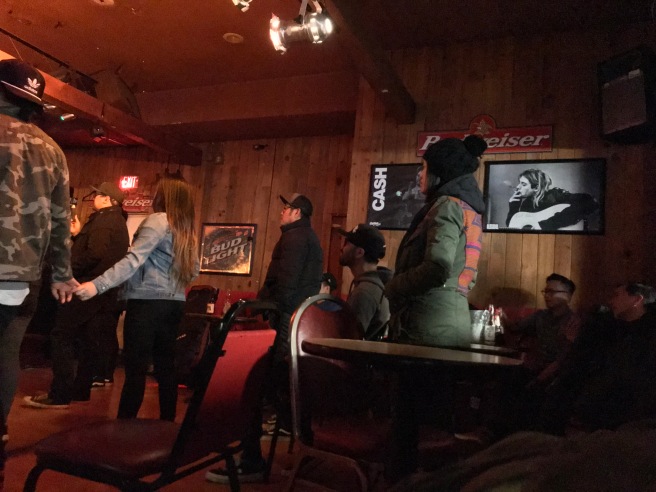 There is also a small pool room and the sort of generic framed pictures of musicians one expects to see in a basement pool or dorm room.

On the night of my most recent visit, the opening acts were Mayday and Hello Pacific. They were followed by the aforementioned Starry Eyed Cadet — whose name alone would’ve been enough to warrant a visit to the Stardust Club. During their set they were joined by Lillian Yee of the equally heavenly Sky Faction.

As they performed, I let my eyes wander around the bar. I noticed that there are still a couple of televisions and it’s possible that some of the old-timers thus haven’t noticed the lounge’s otherwise substantial changes. 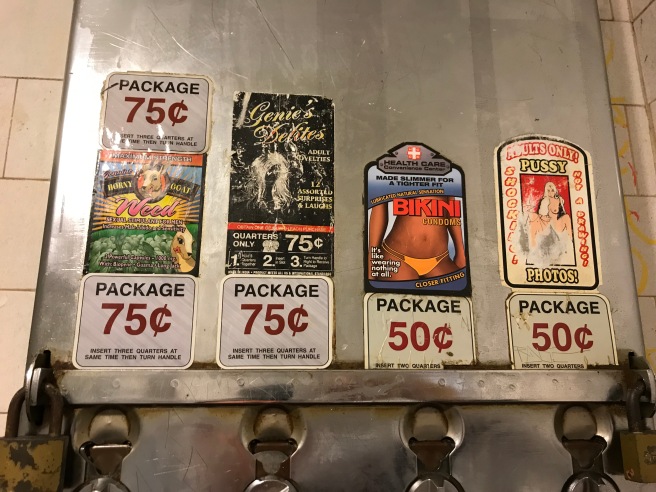 In the bathroom was one of those raunchy novelty vending machines I used to see in remote gas stations on long road trips. I almost dropped in a few quarters just to see if it was actually stocked but didn’t. Stocked or not, it adds to the somewhat grimy atmosphere where, above all else, the ceiling still twinkles, however faintly. 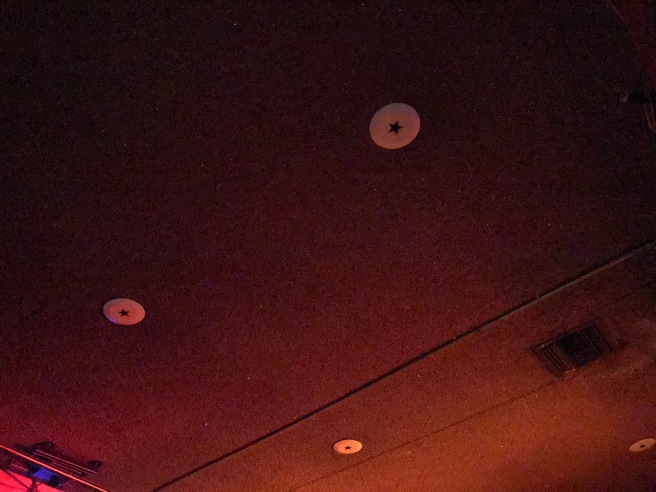 Downey is, like most American suburbs, easily walkable or cyclable and yet rarely does anyone go anywhere but in an automobile. Of its many streets, there is but one dedicated bicycle lane along Gardendale Street, and it’s only a few hundred meters long. The only train line, the Green Line, stops at Lakewood Boulevard Station, five kilometers from the bar. Local service is provided by DowneyLINK, although that ends daily at 6:30 pm. Metro‘s 115 Line, which runs between Norwalk with Playa del Rey, stops near the bar but doesn’t operate much after midnight… so if you hear the cry of “last call,” you may have to find another way home — or wait another three hours for service of the line to resume.