Although not native, many Moreton Bay Figs (Ficus macrophylla) dot the Southern California landscape. The oldest of these Australian immigrants might be those planted by agriculturalist Elijah Hook Workman on the Los Angeles Plaza in 1875. Around that same time, one was planted in Anaheim which later served as the model for the Disneyland‘s Swiss Family Robinson Treehouse. One planted in Santa Barbara in 1876 is the largest specimen in the US. The tallest local Moreton Bay fig is located next to to San Diego‘s Natural History Museum. Because it’s Asian Pacific American Heritage Month, I decided to look at one with significance to Los Angeles’s Japanese community, the so-called Aoyama Tree.

Moreton Bay Fig trees are large, evergreen, banyan trees native to most of the eastern coast of Australia, from the Atherton Tableland in the north to the Shoalhaven River in the south. Its common name is derived from Moreton Bay in Queensland. A specimen grown in Europe was first scientifically described by French botanist René Louiche Desfontaines in the early 1800s. The trees are now common not in many parts of the world, especially California, Hawaii, Portugal, Italy, New Zealand, and South Africa. The trees are especially popular in parks, where they provide ample shade and can find sufficient space for their distinctive network of buttress roots, which require more space than most urban yards provide — although there are exceptions such as Rancho Los Alamitos in Long Beach.

The approximately twenty meter tall Aoyama Tree was planted in 1920. It’s located in a parking lot next to the National Center for the Preservation of Democracy and Geffen Contemporary MOCA. It was formerly the location of the Koyasan Daishi Mission, founded by Reverend Shutai Aoyama in 1912. 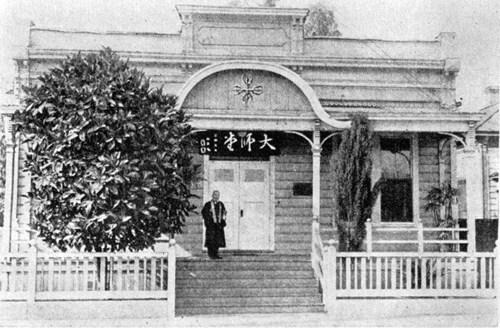 Reverend Aoyama moved to the US in 1909 and originally his mission met in a storefront on Commercial Street. In 1920 he moved his temple to the location of a former restaurant at 133 North Central Avenue. There he planted his tree.

Boy Scout Troop 379, still associated with the temple, were named an outstanding troop by Franklin D. Roosevelt in 1935. In 1937, Koyasan Temple bought a new plot of land and began building a new temple, completed in 1940. In 1942, the same President Roosevelt signed and issued Executive Order 9066, which led to the forced internment of Japanese-Americans in concentration camps, based upon their ethnic origins in a country with which the US was at war. The camps were closed in 1946 and the Koyasan congregation reconvened in 1950. 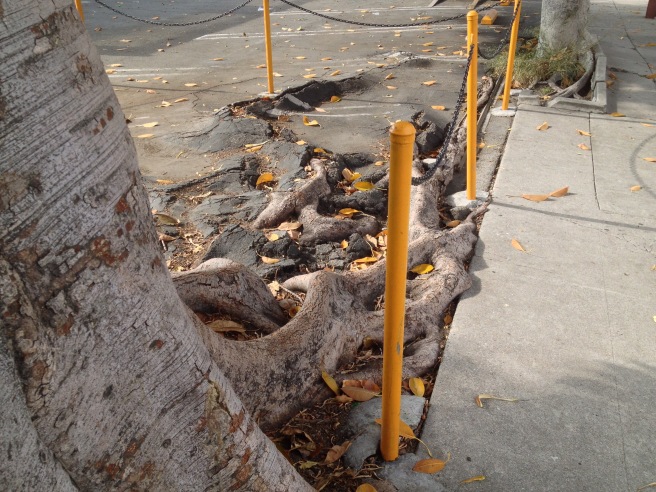 The former site of the temple was razed along with an entire block of residential and commercial buildings to clear the way for the construction of Parker Center in 1952. Of course every development in the 20th century required an attendant parking lot and the Parker Center was no exception. Although much of its network of roots was paved over, the tree was allowed to remain.

In 1970, the Community Redevelopment Agency (CRA) launched the Little Tokyo Project, targeting most of Little Tokyo’s older structures with demolition and residents with eviction so that Japanese firms could build commercial highrises in their place. Residents formed The Little Tokyo People’s Rights in 1973 to represent a community faced with a second round of relocation. The residential Alan, Masago, and Sun hotels were demolished but the Aoyoma tree remained, as did the stretch of buildings along 1st Street, which were designated The Little Tokyo Historic District and declared a National Historic Landmark in 1995. 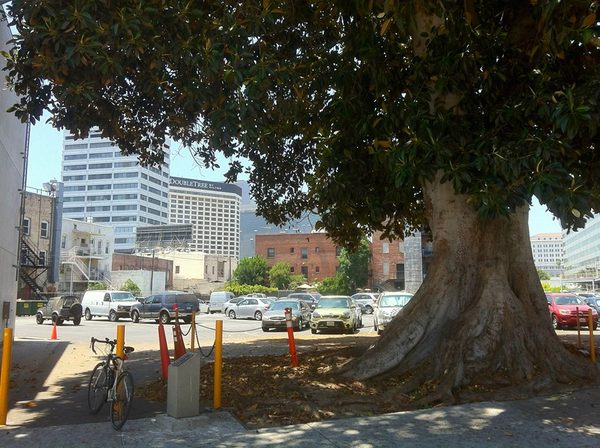 5 thoughts on “Those Useless Trees — The Aoyama Tree”