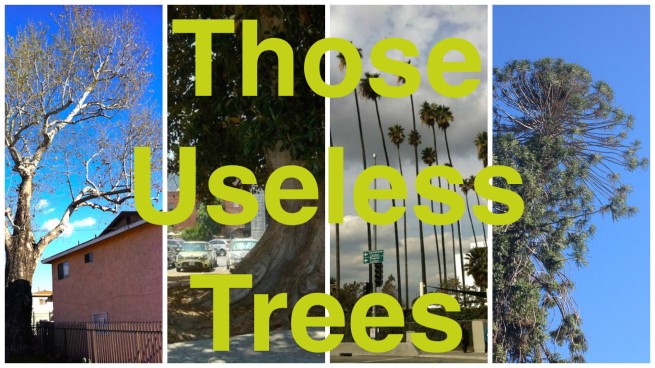 Angelenos are known for their obsessions with celebs and without a doubt, one of the hottest trees on the landscape today is “El Pino Famoso,” also known (because its fame is implicit) as “El Pino.” On my way to breakfast at El Mercado de Los Angeles in Boyle Heights this morning, I caught up with this famous tree, whose IMDB credits include a co-starring role in 1993’s cholo epic, Blood in, Blood Out.

The Bunya Pine (Araucaria bidwillii), as it is commonly known in English, is not actually a pine (genus “Pinus”). The tree is actually in the same genus as the Araucaria araucana, which though also not a pine is nevertheless known in English as the Chilean pine. Araucaria do have characteristics in common with pines, though, including the fact that they’re evergreens and coniferous (there are evergreens which aren’t coniferous, by the way, like larches). Although the Bunya was widespread during the Mesozoic era, today its natural range is limited to a few disjunct groves in Queensland Australia near Moreton Bay.

The indigenous Barunggam people traditionally regarded the Bunya Pine with deep spiritual reverence. Bunyas generally fruit once every three years or so, and when they did the Barunggam would invite neighboring indigenous people to their homeland in the aptly-named Bunya Mountains for festivities which involved religious ceremonies, marriages, and of course, Bunya nut feasts.

El Pino stands near the border of Boyle Heights and East Los Angeles, in the Palma Heights tract of the latter. It towers above the house at 3308 Folsom Street which was built in 1915. Bunyas first appeared in the West in 1843, when English botanist John Carne Bidwill sent specimens to English botanist Sir William Hooker. Parts of Southern California and Australia share a similar Chaparral climate and Australian immigrants such as Eucalyptus and Moreton Bay Figs remain common fixtures of the Los Angeles landscape. Bunyas are much rarer.

Bunyas were popular in the 1880s but were already falling from fashion by the following decade. Several continue to stand in parks but few share space with homes. My suspicion is that they fell from favor because of their cones. Bunyas reach heights of 45 meters and produce cones with diameters of 35 centimeters. Roughly the size of watermelons, they weigh up to ten kilograms (22 pounds) and one doesn’t have to be Sir Isaac Newton to imagine what would happen when they fall.

Navy veteran Sean Mace required multiple surgeries when one fell on him as he slept under a Bunya tree. As a result, he sued the National Park Service and the Department of the Interior for $5 million and the organization has responded by erecting plastic fences and installing warning signs around the tree. Whilst I am sympathetic to Mace’s plight I do think that people should be able to read nature’s signs as well and if there are giant, heavy cones littering the ground beneath a tree that might serve as a sign that it’s no safer a place to nap than, say, an alley strewn with broken bottles (which probably has no sign warning against laying in it).

BLOOD IN BLOOD OUT

El Pino’s fame is based almost entirely on Blood In, Blood Out. Its location doesn’t appear on any star maps but tourists from around the world come there to behold it (and hopefully not to nap underneath it). In that film, when Miklo gets out of prison Paco asks him where he wants to go and without hesitation, Miklo replies, “El Pino.” When Vatos Locos (the fictional gang to which they belong) get there Miklo says “That tree is East Los to me.”

El Pino was chosen by the filmmakers in part for its regional recognizability. There aren’t that many tall structures on the Eastside, and those that there are were built by people (e.g. the Sears, Roebuck & Co. Mail Order Building, the Dependable Logistics Services Building, Fairmount Terrace, the campus of Cal State Los Angeles, and the campus of the LAC + USC Medical Center). Unlike most natural features, El Pino, already tall but perched on top of a hill and surrounded only by homes, is visible from far away. Not long ago, James Rojas led a Latino Urbanism tour of East Los Angeles and Boyle Heights. As we were stood at the far end of Evergreen Cemetery I pointed it out in the distance. As if on cue, a truck rolled up and one of the occupants yelled, “Vatos Locos forever!”

When Blood In, Blood Out was filmed, El Pino and the property on which it’s situated was owned by Eusebio Ortega, who’d moved to the house in the 1980s. He obviously, given its size, didn’t plant the tree and legend has it that the tree was planted by a Japanese dentist known as Mr. T. Okuno — although I suspect that it was planted before he lived there if he acquired the property in the 1940s. Before Okuno and the forced internment of Japanese, the 1940 US census shows that the home belonged to Mr. Orada Hidao and his wife, Kiku — both of whom were born in Japan around the turn of the century.

I’m not sure if it was the same man and I don’t have old census records lying around but I did discover that there was a Thomas Takeo Okuno who studied at the dental school of University of California in Berkeley and later moved to Southern California. He was born in Hawai’i to Hamamura Okuno on 5 November 1902. At Berkley, he boarded with the family of Masaaki Honda, who later wrote Suzuki Changed My Life. In 1940, two years before the forced internment of Japanese-Americans, there was a T. Okuno was registered as living in Inglewood with his wife, Haneke, and their two daughters, Nobuko (born in 1936) and Tomoko (born in 1939). I don’t know if this was the same T. Okuno but whatever the case may be, this T. Okuno was sent to the notorious Manzanar concentration camp in the Owens Valley.

When the Japanese-Americans were freed, most were dispossessed of all they had owned prior to 1942. The version of the legend I’ve most often encountered is that the Okunos that lived beneath El Pino received the house as a gift from Mrs. Okuna’s sympathetic Anglo boss, which seems pretty generous. Casting further doubt on this version, in 1940 the property had been registered to another Japanese-American, one Hide Okuno. Thomas Takeo Okuno died in December 1986 and I know nothing of the rest of the Okunos but if you can clear up the story, I’d be very interested in any information you might provide.

I’d also like to create a listing and map of all known Bunyas in the Southland. Here’s a map of the ones that I know of. If you can help, please send a picture and address and I’ll happily credit you.