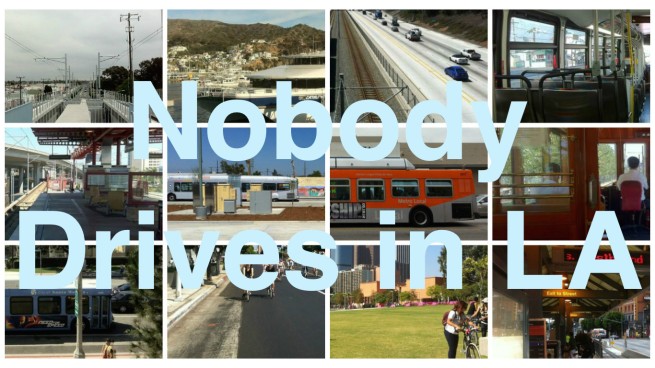 With bicycles, buses, ferries, planes, rideshares, sidewalks, subways, taxis, and trains at Angelenos’ disposal, why would any sane person choose car-dependency? Nobody Drives in LA celebrates sense and sensibility in transportation.

The first train to the Westside followed nearly the same path as the Expo Line of today. The steam-powered Los Angeles and Independence Railroad (LA&I) connected downtown Los Angeles with a western terminus at a Santa Monica wharf near the pier and made its maiden voyage on 17 October 1875. In 1909, the private railway was sold to the Los Angeles Pacific Railroad, which electrified a section of the line from the coast to the La Cienega Stop. Most of the rest of the line was electrified in 1911 after it was acquired by the Southern Pacific Railroad in what was was referred to as “The Great Merger.” As a result the Pacific Electric Railway — commonly referred to as the Red Car System — became the largest interurban electric passenger rail in the world, covering over 1,600 kilometers of track.

As car ownership increased and the trains aged, some of the less-used train lines were dismantled and replaced with bus lines — as early as 1925. By the 1950s, Los Angeles‘s main freeways promised freedom to anyone with a set of wheels. Few could imagine that those wide open roads would become choked with traffic, gridlock and frustration, reducing traffic to a miserable, roadrageous crawl. The process was accelerated by what was later known as “The Great American Streetcar Scandal,” in which a group of companies including General Motors, Firestone Tires, Standard Oil, Pacific City Lines, and others seemingly conspired to acquire and dismantle most of the country’s passenger interurban trains to increase sales of and reliance on automobiles.
The Expo Line’s predecessor, by then known as the Santa Monica Air Line, was purchased in 1953 and made its final trip on 30 September of that year. The very last Red Car made its last trip to Long Beach in 1961. In 1973, the oil-dependent nation suffered from a serious oil crisis. The following year, Senate hearings took place regarding the Streetcar Scandal, as it began to dawn on everyone that the destruction of light rail may have been undertaken with an ulterior motive. In 1976, the State of California formed the Los Angeles County Transportation Commission to plot the return of light rail as an attractive alternative to reliance on driving. The first new line, the Metro Blue Line, began operation in 1990, running mostly along the track of the last of the operating Red Car lines.

The new Expo Line is the latest addition to the Metro’s growing rail system. Since the Culver City and Farmdale stations are still closed (set to open 20 June), the Expo line doesn’t take passengers all the way to what most would consider to be the Westside just yet. When that happens, train stations will open near downtown Culver City, Simpang Asia, Tehrangeles, Little Osaka, Bergamot Station, The Continental Shop, Ye Olde King’s Head, and other celebrated attractions of the Westside.

Right now the Expo Line travels from Downtown through the northern portion of South Los Angeles’s Westside, which has its own charms but, like most of the city south of the 10, is off the radar of many Angelenos. That’s where I started my trip.

The La Cienega/Jefferson Station (formerly Sentous) is located where the neighborhoods of Baldwin Hills, Cameo Plaza, and West Adams meet. Baldwin Hills is sometimes referred to as the “Black Beverly Hills“; West Adams is a mostly Latino neighborhood with a vibrant art scene and numerous, impressive Crafstman homes. However, most of the attractions aren’t particularly close to the stop. Instead, to the north, are the headquarters of radio stations KLOS and KABC, to the south is a See’s Candies — from the station’s platform one can smell the rich, sweet smells. Just south of See’s is a 1960s looking Chinese Laundry shoes warehouse. At this station I was additionally presented with the difficult task of trying to explain to a woman who only spoke Korean that she had taken the new Expo Line (confusingly also given a blue color) from Downtown Los Angeles and not the Blue Line to Long Beach.

The next stop is Expo/La Brea (formerly Airville), again situated between West Adams and the Baldwin Hills/Crenshaw area. It’s near the Rancho Cienega Sports Complex, which includes Celes King III Pool and Jackie Robinson Stadium, but not a lot of obvious interest to the casual explorer. On the platform, a young father belted out a decent version of Ray Charles‘s “I Got a Woman.” When they got on the train, he proceeded to comb his young son’s hair as the little boy looked out the window and made “choochoo” noises.

As I mention, the Dorsey High-adjacent Farmdale station (formerly Cienega), is still closed while, I was informed by an MTA worker, safety concerns are addressed. 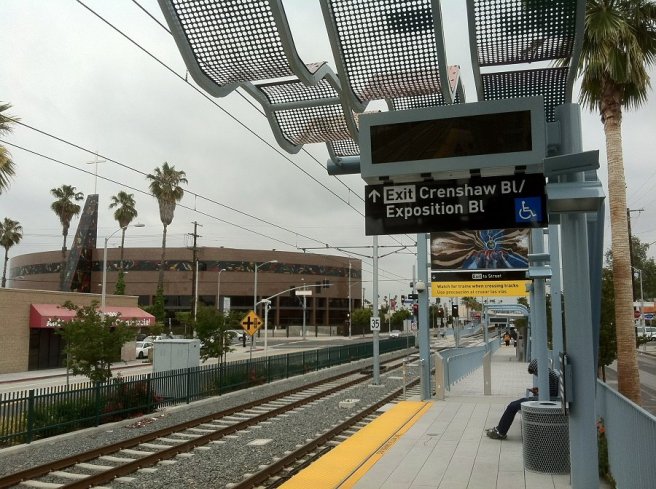 The Expo/Crenshaw Station (formerly 11th Ave) is located at the intersection of the neighborhoods of Baldwin Hills, Jefferson Park, Leimert Park, and West Adams. Jefferson Park was once known as both “Little New Orleans,” as well as “Sugar Hill,” and boasts many attractive Craftsman and Neo-Georgian homes. Leimert Park is sometimes known as “the Soul of Los Angeles” for its vibrant cultural scene. As with the La Cienega/Jefferson stop, checking out the attractions involves more time than I allotted myself. In the future the station is set to be the northern terminus of the proposed Metro Crenshaw Line, which will connect the Expo Line to the Green Line. On the day of my visit I walked north and a motorcycle passed me blaring a James Brown song. On the sidewalk, a small, blue budgie paced around humorously. I stopped to take pictures and passerbys smiled.

Back at the station, waiting for the train, I spied a little boy in a baggy, white T-shirt cautiously approach a sputtering van brush-painted pink and warbling music. Behind him his father looked on with apparent amusement. Meanwhile an older woman told me how excited she was that trains have returned to her neighborhood and how much she prefers riding them to busses.

The Expo/Western Station (formerly Western) lies at the border of Jefferson Park, University Exposition Park West, and King Estates — right next to the James A. Foshay Learning Center. A relentless salvo of only the most overplayed ’80s pop (e.g. “Girls Just Want to Have Fun” and “Let’s Dance“) emanating from Alondra Mini Market failed to perturb the proud cock atop the adjacent Exposition Fish & Poultry. Catercorner, a Oaxacan vegan restaurant advertised its coming opening.

The Expo/Vermont Station (formerly Vermont Avenue) lies at the intersection of University Park and Exposition Park, adjacent to USC and the large Masjid Omar Ibn Al-Khattab mosque, which opened way back in 1414 (1994 on the Gregorian calendar). University Park is home to USC — California‘s oldest private research university. Exposition Park is home to the California Science Center, California African-American Museum, Los Angeles Memorial Coliseum, Los Angeles Swimming Stadium, Natural History Museum, and the Exposition Park Rose Garden, arguably making it the primary cultural center of South Los Angeles. On the south side of Exposition, mostly barren yards were nonetheless freshly weed-whacked and the air was heavy with the scent of grass clippings, exhaust and what I think was chicken. A group of children pursued each other in an endless circle. The other side of the street seemed comparatively bucolic, with flowers and papayas growing in gardens and houses shaded by large trees.

Expo Park/USC Station (formerly University) is only three blocks east of Expo/Vermont, so I decided to walk to it rather than wait for the next train. The short journey’s highlight was crossing paths with a family — the mother of which was wearing a Rolling Stones T-shirt, the father, a Misfits T.

As the train approaches the Jefferson/USC Station, it briefly goes underground and begins heading north up Flower Street, toward downtown, breaking with the old Santa Monica Air Line which extended east to Alameda. Near the stop is Felix Chevy, the Galen Center, and landmark Shrine Auditorium. 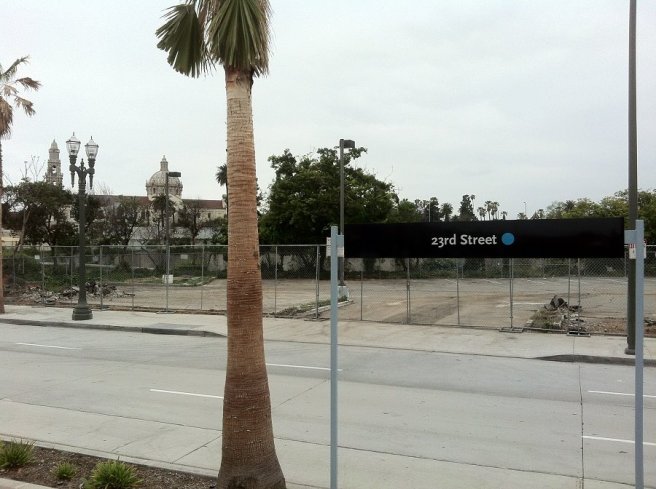 At the 23rd Street Station, the train just crosses the 110, making its one and only stop on South Los Angeles’s Eastside, at a station shared with the only Metro line I’ve never taken — the Silver Line (connecting El Monte to Harbor Gateway). Nearby is Los Angeles Trade Tech College.

On the way to Pico/Chick Hearn Station, in Downtown’s South Park neighborhood (not to be confused with South Los Angeles’s much older South Park), a middle-aged Belizean man opined about the homeless problem, exorbitant loft prices, his love of Mexican food, his childhood trips to Chinatown, and historic strip clubs to seemingly anyone who listened. The station is again shared by the Silver Line and the Blue Line (which the Korean woman had hopefully by then taken to Long Beach). It’s located right by Staples Center, L.A. Live, and the Los Angeles Convention Center.

When I got off, a stranger asked me for a $6 so that he could go to a Lakers game. Upon exiting the platform I was swarmed with paid signature-gatherers who presumably ventured to South Park to take advantage of the large crowd gathered for basketball. As I ran away, one of the signature-gatherer’s yelled at me in a last ditch effort to elicit sympathy (and increase his paycheck), “but it’s for the kids!”

Finally, the last stop is the 7th Street/Metro Center, located in downtown’s Financial District. Opened in 1991, it serves not only the Expo line, but the Blue Line, Silver Line, Purple Line, and Red Line (as well as more than 50 bus lines). Outside the station the air was thick with the stench of urine and cigarette smoke. I was confronted by a din of hissing airbrakes, a cacophony of car horns honked in obvious frustration, and helicopters hovering above. I was headed to Bar | Kitchen for my brother’s birthday dinner. The greeter informed me that I was the only one to arrive on time. Apparently, everyone else had opted to drive and, I would later learn, were navigating detours and looking for parking… a frustrating experience that thankfully will fade from memory the longer I live in Los Angeles without a car.