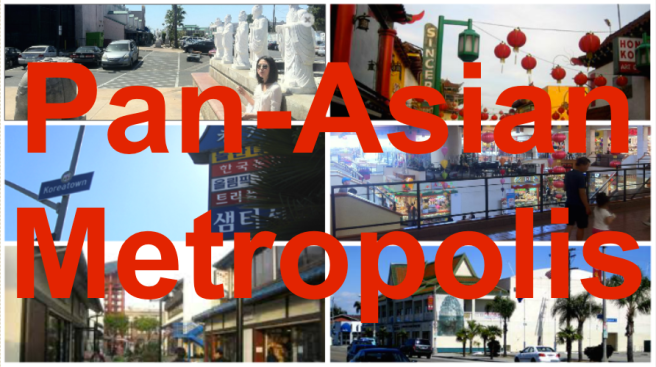 Most of the world’s major religions — and many minor — were born in Asia. The Abrahamic religions (Christianity, Islam, Judaism, Bahá’í, Druze, Samaritanism, and Bábism), were all born in West Asia; Iranian religions include Zoroastrianism, Yazdânism, Ætsæg Din, Ahl-e Haqq, Mandaeism, and Manichaeism; South Asia gave birth to the Dharmic religions of Hinduism, Jainism, Buddhism, and Sikhism; and East Asia produced Taoism, Confucianism, and Shintoism. That noted, the Abrahamic regions are rarely if ever characterized as Asian religions. Abraham, Jesus, and Muḥammad — although all were born in Asia — are never labeled “Asian.”

In Los Angeles it’s fairly safe to assume that many local Muslims and Christians actually are Asian, however, and an exhaustive directory of Asian-American congregations would include many mosques and a huge number of churches. As an agnostic architecture fan, many of those churches are worth appreciating as they — along with post offices, city halls, libraries, and steakhouses — are generally amongst the most interesting structures found in many a suburb. However, for the sake of my sanity, I’m excluding them from this piece and instead focusing exclusively on religions with South and East Asian roots — i.e. Buddhist, Confucian, Hindu, Jain, Sikh, and Taoist. As always, additions and corrections are encouraged.

Eric Brightwell is an adventurer, writer, rambler, explorer, cartographer, and guerrilla gardener who is always seeking writing, speaking, traveling, and art opportunities — or salaried work. He is not interested in writing advertorials, clickbait, listicles, or other 21st century variations of spam. Brightwell’s written work has appeared in Amoeblog, diaCRITICS, and KCET Departures. His work has been featured by the American Institute of Architects, the Architecture & Design Museum, Boom: A Journal of California, the Craft & Folk Art Museum, Form Follows Function, Los Angeles County Store, Skid Row Housing Trust, and 1650 Gallery. Brightwell has been featured in the Los Angeles Times, Huffington Post, Los Angeles Magazine, LAist, Eastsider LA, Boing Boing, Los Angeles, I’m Yours, and on Notebook on Cities and Culture. He has been a guest speaker on KCRW‘s Which Way, LA? and at Emerson College. Art prints of his maps are available from 1650 Gallery and on other products from Cal31. He is currently writing a book about Los Angeles and you can follow him on Facebook, Instagram, and Twitter.