Today the first train left from downtown Los Angeles to downtown Santa Monica left 7th Street Metro Center. It was the first passenger train to run between the two downtowns since October 1953 (although freight trains ran until 1988). 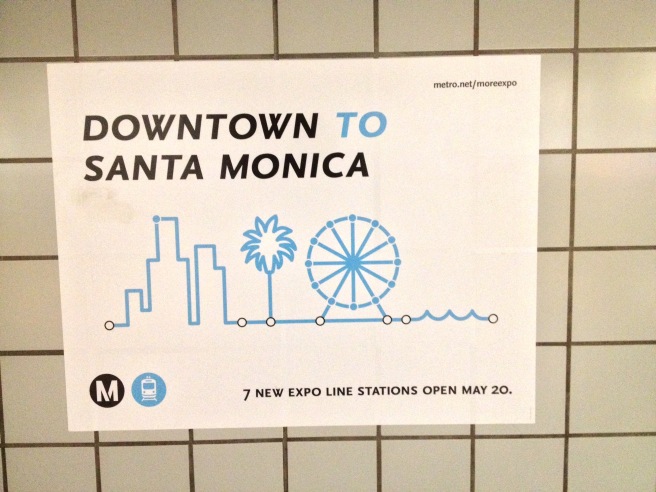 The first train departs for downtown Santa Monica, and thus the Westside was dragged kicking and screaming into the 1990s. On the Eastside, as I approached Downtown on the Gold Line, I eavesdropped on the two young women sitting next to me and deduced that one was local and the other visiting from Boston. The local was explaining to the visitor the differences between Cal-Mex and Tex-Mex and when the visitor asked about Chinatown, the local told her that Chinatown is home to a largely older, Vietnamese and Cantonese population whilst the “SGV” is the “new Chinatown.” The Bostonian asked her about visiting Koreatown and the local assured her that Koreatown is imminently “Metroable.”

A short time later, riding the subway towards 7th Street Metro Center, three strangers discussed with excitement the opening of the Expo Line extension and reminisced about the 1990s, when they watched the Red Line being constructed. The woman, wearing the baggy houndstooth pants favored by kitchen workers, said she’d have to wait until a day off to ride. The two men continued to talk about the specifics of the Downtown Regional Connector. I was impressed with just how connected all of these transit users were. 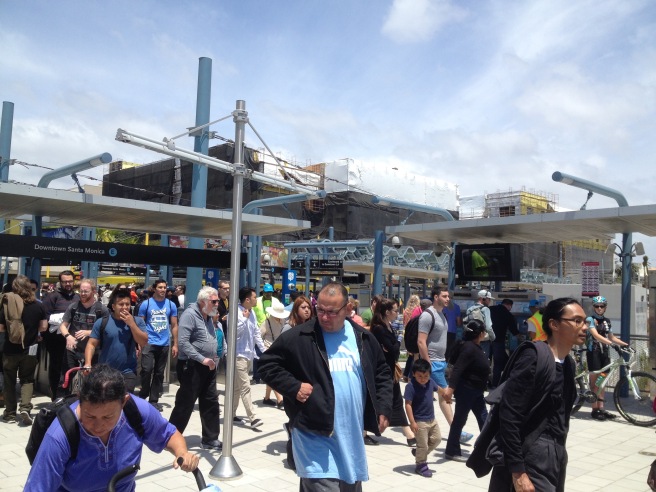 On the 7th Street Metro Center platform there were more transit fans, making a point of waiting until 11:28 to take the first passenger train to the Westside in 63 years so that they wouldn’t have to disembark in Culver City, the line’s former terminus, and then move to the back of the line to re-board.

Eric Brightwell is an adventurer, writer, rambler, explorer, cartographer, and guerrilla gardener who is always seeking writing, speaking, traveling, and art opportunities — or salaried work. He is not interested in writing advertorials, clickbait, listicles, or other 21st century variations of spam. Brightwell’s written work has appeared in Amoeblog, diaCRITICS, and KCET Departures. His work has been featured by the American Institute of Architects, the Architecture & Design Museum, Boom: A Journal of California, the Craft & Folk Art Museum, Form Follows Function, Los Angeles County Store, Skid Row Housing Trust, and 1650 Gallery. Brightwell has been featured in the Los Angeles Times, Huffington Post, Los Angeles Magazine, LAist, Eastsider LA, Boing Boing, Los Angeles, I’m Yours, and on Notebook on Cities and Culture. He has been a guest speaker on KCRW‘s Which Way, LA? and at Emerson College. Art prints of his maps are available from 1650 Gallery and on other products from Cal31. He is currently writing a book about Los Angeles and you can follow him on Facebook, Instagram, and Twitter.