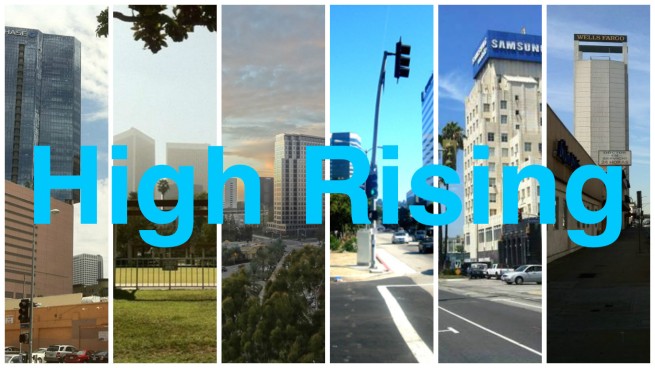 The skyline of the modern city is largely defined by its skyscrapers; those towering, gleaming symbols of the architectural ambition, developer wealth, humanity’s hubris, and  usually crowned with a corporate logo. Before skyscrapers, cathedrals were nearly always the tallest human-made structure; Before them, the ancient pyramids. Their symbolic (and perhaps psychosexual) importance is subconsciously understood by everyone from  terrorists, invading aliens, and rampaging gaikaiju — all of whom tend to ignore military and governmental targets for these iconic buildings.

Before tall buildings, the word “skyscraper” was used as the name of a race horse or applied to high-flying birds, ships’ upper sails, and extremely tall people. It was first applied to buildings in Chicago in 1888. The bar (or sky) was relatively low then — the Home Insurance Building (a skyscraper completed in 1884) was just ten stories and 42 meters tall.

The first seven skyscrapers to claim the title of world’s tallest building were all located in New York City. To this day, every time someone so much as proposes constructing a building of over four stories the NIMBYs all cry “Manhattanization!” rather than “Chicagofication!, which is not a word. Undaunted, Chicago reasserted its role as the skyscraper capital with the completion of Sears Tower, which had a long run as the worlds tallest building, 1974-1998. It was surpassed by Petronas Towers, a symbol of the then newly industrialized nation of Malaysia. They, in turn, were surpassed by Taiwan’s Taipei 101, the design of which was informed by both Chinese numerology and feng shui. The next and current tallest building is the UAE’s Burj Khalifa, named after the emir of Abu Dhabi, who made its completion possibly by donating billions of dollars to the then financially troubled Dubai emirate.

Los Angeles has never had any record-holding skyscrapers unless we trot out the phrase “west of the Mississippi” (and east of the Pacific). I point out to architectural size queens that Los Angeles, from below-sea-level Wilmington to the top of Mount Lukens, has the greatest difference in elevation of any city in the known universe. I’m told, however, that mountains don’t count — even if at 1,547 meters they utterly dwarf the planet’s tallest skyscrapers. 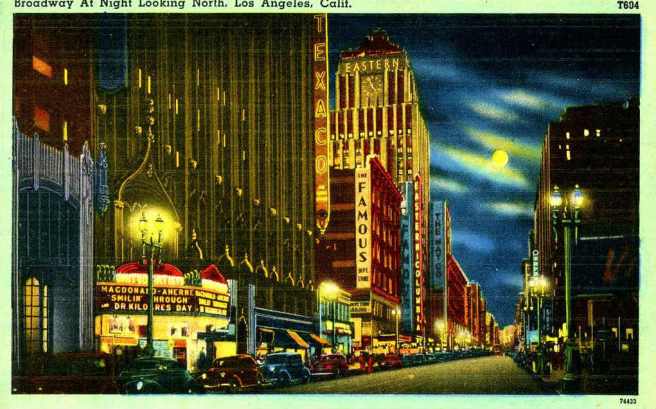 Los Angeles’s earliest skyscrapers aren’t especially tall but are among the city’s most beautiful. Consider the Art Deco, Spanish Gothic Revival, and Beaux Arts buildings of the Historic Core, including the Eastern Building, United Artists Building, and the many designed by English-American architect John Parkinson. All were built after a height limit of 150 feet (46 meters) and thirteen stories was enacted in 1904, primarily out of aesthetic considerations. The height limit was repealed in 1956 and in the aftermath A.C. Martin’s stunning sixteen story Los Angeles Department of Water and Power Building and  William Pereira’s 138 meter, 32-story Occidental Center were built. Another ordinance was adopted in 1974 — that buildings with a height of over 75 feet (23 meters) must have helicopter pads on top, thus depriving Los Angeles’s rising skyline of curves, slants, and spires and rendering it as indistinct and interchangeable that of cities like Lubbock, Oklahoma City, San Jose, and Winnipeg.

Library Tower, destroyed by aliens in the film Independence Day, and referred to by George W. Bush as “Liberty Tower,” is a fairly anonymous flat-top that was both Los Angeles’s tallest building and the tallest building “west of the Mississippi”  from 1989 until 2016. Upon completion it will be deposed by a much more elegant building, the new Wilshire Grand Tower. Although still under construction, the building earlier this year reached a height of 73 stories and 335 meters. Once the rooftop spire is installed, it will become the city’s new tallest building, if not its highest (thanks to Library Tower rising from Bunker Hill).

That its builders, Hanjin Group (한진 그룹), are Korean, reflects Korea’s ascendancy on the global stage. Its graceful curve and spire also signal another development — the repeal of the helicopter ordinance in 2014, allowing Los Angles’s skyline not just to move upward, but forward. Given Korea’s role in redefining the skyline and the fact that May is Asian Pacific American Heritage Month, I thought it would be fun to look at local highrises designed by Asian-American architects, whose structures earlier helped transform the skyline of Los Angeles.

The eleven story, forty meter tall, 430 room Miyako Hotel was designed by local architect Hayahiko Takase in 1986. It was built as part of the Community Redevelopment Agency‘s (CRA) redevelopment of Little Tokyo. Its construction was financed by a consortium of private investors and banks and the Kintetsu Corporation. It’s served by LA DOT DASH A and Metro’s 30/330, 40, and Gold lines.

The nineteen story, 67 meter tall, 726 room, Century Plaza Hotel was designed by Detroit-based architect Minoru Yamasaki for Aluminum Company of America (ALCOA). It was completed in 1966. The building, which elegantly incorporates elements of Modernism and New Formalism, is among the most beautiful large buildings on the Westside. In 1969 it hosted the only Presidential state dinner ever held outside the Whitehouse, in honor the Apollo 11 astronauts. It’s served by Metro’s 16/316, 28, and Rapid 728 lines; Culver City Transit’s 3 line, Big Blue Bus’s 5 line, and Commuter Express line 573. 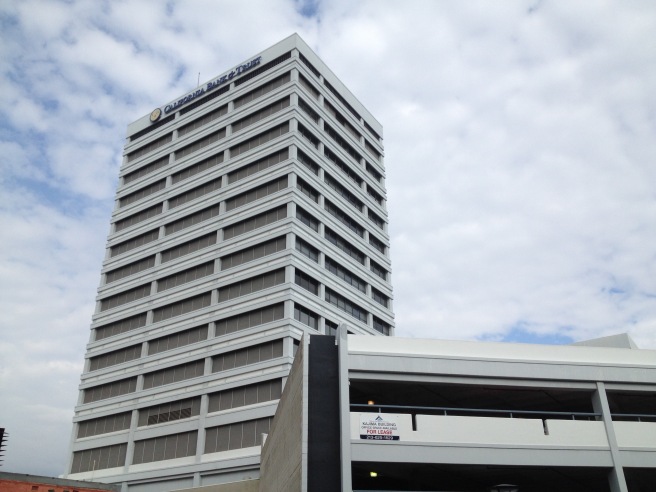 Construction of the 17 story, 71 meter tall Kajima Building began in 1966 and was completed in 1967. It was the first commercial building constructed in the US by a Japanese developer, the Tokyo-based 鹿島建設株式会社 (Kajima Corporation). The architect was Hayahiko Takase. It’s served by Metro’s 30/330, 40, 442 lines as well as DASH Downtown A and Commuter Express 534.

The 21 story, 85 meter tall, 434 room New Otani was designed by Hayahiko Takase and completed in 1977. In 2007 it became the Kyoto Grand Hotel and Gardens. Within it are three restaurants: Garden Grill, Thousand Cranes, and the Azalea. Atop it is a rooftop garden, Kyoto Gardens. In 2012 it was clunkily rebranded the DoubleTree by Hilton Los Angeles Downtown. It’s served by Metro’s 30/330, 40, and 442 lines; and LA DOT’s Commuter Express 534, DASH Downtown A, and DASH Downtown D lines.

The 32 story, 135 meter tall 5900 Wilshire was designed for Mutual Benefit Life by Gin Wong when he was still at William Pereira & Associates. Construction began in 1968 and was completed in 1971. Today it’s the tallest building in the Miracle Mile. In front is a memorial, made of large fragments of the Berlin Wall and installed in 2009 by the Wende Museum. It’s serviced by LA DOT’s DASH Fairfax Line and Metro’s 20, 217, and Rapid 780 lines. The Purple Line subway is scheduled to arrive in 2023.

The 33 story, 141 meter tall Arco Tower was designed by Gin Wong Associates and was constructed from 1988-1989. It’s the second tallest building in Westlake’s City West area, an area sometimes referred to as Downtown Los Angeles’s New Jersey. Arco relocated in 1998 and it’s now officially known as 1055 West Seventh and home to healthcare provider LA Care. It’s served by Metro’s 51/52/352 and DASH Downtown A and E lines.

The 44 story, 174 meter tall Century Plaza Towers were designed by Minoru Yamasaki, and somewhat resemble his World Trade Center in New York City, demolished by al-Qaeda in the September 11 attacks. The Century Plaza Towers were featured on the cover of Yes’s unfairly overlooked 1977 album, Going for the One as well as Olivia Newton-John’s video for “Totally Hot.” On the NBC series, Remington Steele, they housed the office of the titular detective. They’re not only the tallest building on the Westside but the tallest buildings outside of Downtown. The towers are served by DASH Commuter Express line 534 and 573, Culver City Transit line 3, Big Blue Bus line 5, and Metro’s 16/316 and 28 lines. The Purple Line subway is scheduled to arrive in 2026.

As always, additions and corrections are welcome but it’s worth repeating that the focus is on Asian-American architects and not Asian architects and developers, which is why the Miyako Hybrid Hotel and the planned Metropolis Project are not included, nor is it about highrises which mainly serve Asian-Americans, thus no Cathay Manor or Little Tokyo Towers.