Tomorrow is St. Lucy’s Day, a holiday primarily observed in Northern and Central Europe… and the Upper Middle West. If it seems odd for Lutherans to observe a Saint Day, it’s because it sort of is. Then again, as with all the best Christian observances, the holiday’s roots likely if anythinhave little to do with either saints or Christianity.

St. Lucy’s Day begins with a young girl clad in white with a lit crown of candles positioned in her hair in a fir wreath (or lingonberry or whortleberry twigs). She leads a procession of candle-bearing girls with coffee, ginger snaps, glogg, and St. Lucia buns (lussekatter). Sometimes there are boys in conical hats known as “star boys.” The children sing Lucia songs which provide a welcome break from Christmas Carols.

Falling near the longest night of the year, the symbolism of young maidens bearing light-bringing fire and bounty isn’t too hard to figure out, but if you must know the official Christian version of events, then here you go. Officially, Lucia helped the early Christians in Italy who hid in the catacombs. In order to see, but needing to bring food in her hands, she constructed a wreath of candles. Yeah… right.

The truth is that before the light-bringing Lucy was invented, Germanic people and their neighbors observed “Lussi Night.” The figure, Lussi die dunkle, was a dark, evil female spirit that came on the 13th of December to punish those with uncompleted tasks. Similar (and perhaps to related) to Lilith, the Mesopotamian storm demons, Lussi also preyed upon children. In fact, a whole mob of Lussiferda (Lisle-Ståli, Store-Ståli, Ståli Knapen, Tromli Harebakka, Sisill, Surill, Hektetryni and Botill) would go around and enter houses through chimneys to kidnap children. Sound vaguely familiar?

I can’t help but wonder if there’s a connection between St. Lucy, the Lussiferda, and the Biblical Lucifer. The Hebrew Bible refers to the “lightbearer” or “bringer of the dawn” as הֵילֵל, which is pronounced “HAY-lale.” The translators of the King James Version, published in 1611, chose to use the Latin “lucifer” (lowercase), Latin for “light-brining.”

In Italy, where St. Lucia is said to have lived and died, children leave sandwiches for her and she rides a flying donkey, giving coal to bad children and… flour, sugar or salt to the good. Now that’s an incentive! They don’t, however, eat anything made of wheat flour on this day, munching instead on cuccia (a desert made of wheat berries) and biscotti made to look like eyeballs. 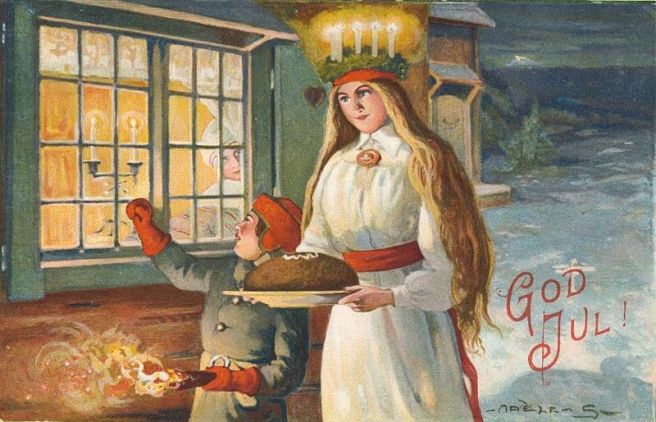 In Hungary, groups of children sing ancient fertility songs and, if given gifts of pears, bless the houses’ poultry. If not rewarded, they have to power to make all the chickens die… except one… which is left blind.

A newer tradition is for college students to party all night long on St. Lucia Day, since it’s one of the last chances to get together before going home for Christmas.

“A NOCTURNAL UPON ST. LUCY’S DAY,
BEING THE SHORTEST DAY”

‘Tis the year’s midnight, and it is the day’s,

The sun is spent, and now his flasks

The world’s whole sap is sunk;

Whither, as to the bed’s feet, life is shrunk,

Dead and interr’d; yet all these seem to laugh,

Compar’d with me, who am their epitaph.

Study me then, you who shall lovers be

For I am every dead thing,

In whom Love wrought new alchemy. For his art did express

A quintessence even from nothingness,

From dull privations, and lean emptiness;

Of absence, darkness, death: things which are not.

All others, from all things, draw all that’s good,

Life, soul, form, spirit, whence they being have;

I, by Love’s limbec, am the grave

Of all that’s nothing. Oft a flood

Have we two wept, and so

Drown’d the whole world, us two; oft did we grow

To be two chaoses, when we did show

Care to aught else; and often absences

Withdrew our souls, and made us carcasses.