With Homes Fit for Heroes, I normally celebrate multi-family housing. Every so often, however, I find a single-family home worth singing the praises of. Such is the case, I reckon, with the mansion at 2718 Hyperion Avenue which I re-visited for the first time after a roughly decade-long absence. In a way, it’s multi-family housing too — having been the residence of several generations of Angelenos — sometimes unrelated but living under the same roof. It’s also mixed-use, which earns it points and makes it worthy of consideration.

The home, though large, is what one might refer to as hidden in plain sight — a fact made remarkable by its location along busy Hyperion Avenue. One one side is a location of Trader Joe’s. On Yelp, 72% of reviews contain complaints about that market’s nightmarish parking lot although roughly 100% of those are made by the very urban rubes who insist on driving rather than walking or cycling to the market — and thus cause it to be as nightmarish as it is. On the other side is Merrill Plaza, a run-of-the-mill 1980s strip mall, the status of which is somewhat elevated by its having a name. Its parking lot is less nightmarish — but only because it is small and not as many automobiles crowd into it.

Tucked between these two surface parking lots is a large Craftsman home, cloaked in a thicket of greenery so dense it would be easy to miss if not for the large, faded sign out front reading “Tokio Florist.” 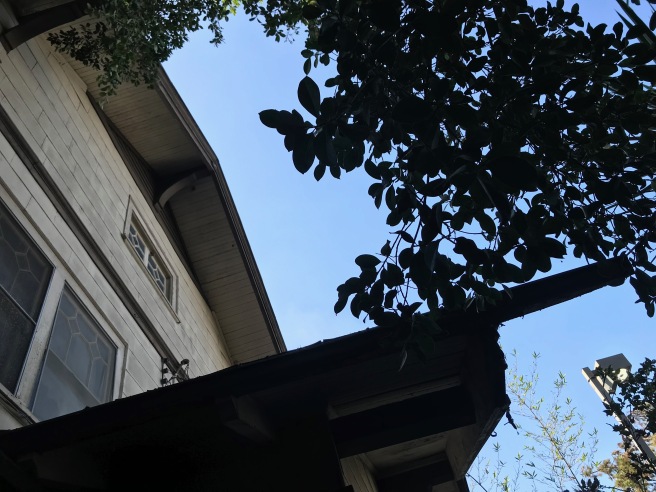 According to the Los Angeles Department of Building and Safety, the home was built in 1914, and originally stood at 326 South Normandie Avenue, in what’s now Little Bangladesh. According to the Los Angeles County Assessor, on the other hand, it was built in 1918. Whatever the case may be, it seems likely that it was moved to its current location in 1929 by Kress House Moving Company for a cost of $5,000.

A year later, the Elmwood Apartments were constructed on its former site and a year after that, those apartments were raided and discovered to be operating as an opium den. Across the street from the home’s new location was the newly opened Disney Studios. 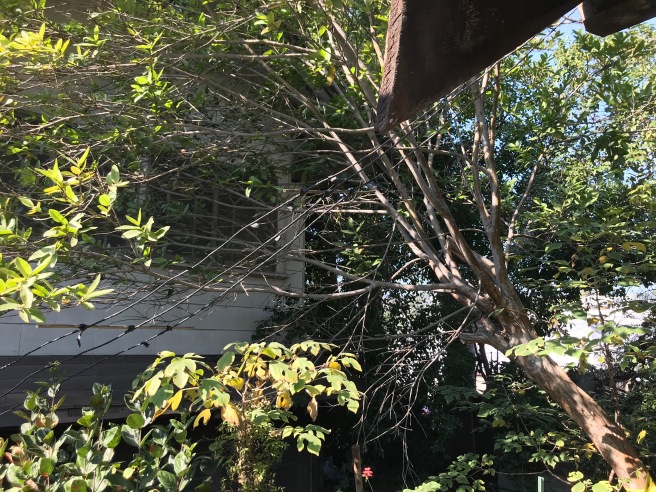 I wish that I knew the name of the home’s architect but I don’t. To me, it seems to have the somewhat incongruous appearance of a ski chalet. It seems to me to also have Storybook, Tudor revival, and maybe even faintly Chinese elements as well. 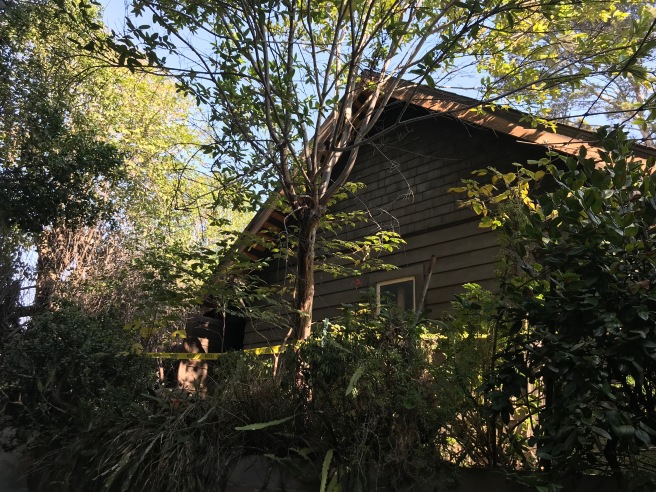 Surrounding it are a collection of modest buildings which seem to have been used for various purposes. I had been to the home when Tokio Florist was still in business. By then, Ms. Kozawa was in her 90s. Her hair was mostly dark, although shocks of gray hair swept back from her temples which gave the wife of Frank something of the appearance of the Bride of Frankenstein. If I recall correctly, business was conducted on the porch and accessory buildings. I definitely didn’t venture into the house at any point.

The home’s first residents were Harrison Benton Brigham and Eunice L. Brigham (née Landrum). Brigham was born on a farm in Latah County, Idaho in 1888. After living in Washington for a spell, he was by 1913 living in Los Angeles and that year graduated from the College of Osteopathic Physicians and Surgeons. Brigham specialized in diagnostic roentgenology and started his own practice in 1917. He was involved in the formation of the state’s first osteopathic hospital, Monte Sano Hospital & Sanitarium, which opened nearby in 1923. He was also a member of the Freemasons and Kiwanis organizations. 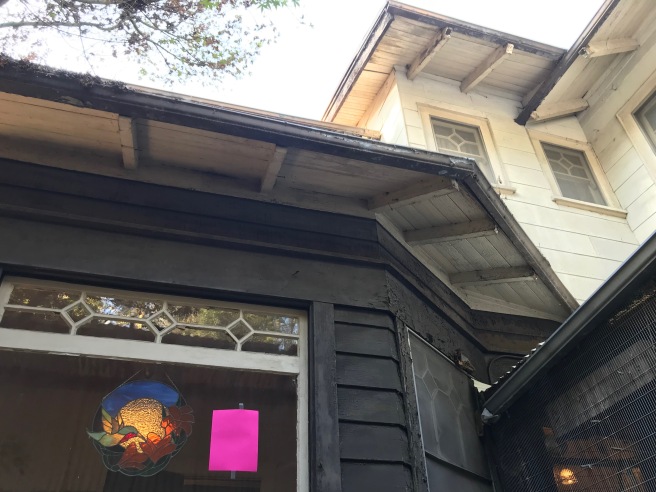 Eunice Landrum was born in Arkansas in 1899. She was a member of the Los Angeles Alumnae Chapter of the musical sorority, Mu Phi Epsilon. She married Harrison Brigham in 1920 and afterward seems to have devoted much of her time to hosting luncheons, tea, bridge games, and musicales for her fellow sorority members. In 1926, she gave birth to a daughter, Elaine. A son, James, followed in 1931. Also living in the home were Eunice’s mother, Lula, and the couple’s live-in servant, Beulah Harper.

Not far away, at 4537 Los Feliz Boulevard, Yuki Sakai (née Kawakami) operated Tokio Florist on a five-acre lot they leased. Members of Sakai’s family raised flowers in the San Fernando Valley, including carnations, chrysanthemums, delphinium, freesia, Iceland poppies, protea, ranunculus, snapdragons, stock, and sweet peas. Flowers including gladiolas and poinsettias were also grown in the garden surrounding the flower shop, which also included on its grounds a Japanese garden designed by a Mr. Kato. Aiding Ms. Sakai was her brother and her daughters. All, except the eldest, had been given flower-related English names. Etsuko was “Rose,” Hisako was “Pansy,” and Miyoko was “Violet”. Sumiko was “Lillian” — although she seems to have been known to most as “Sumi.” There was also a son, Akira, who became “Dan.”

Yuki was a widow. Her husband, Masao “Fred” Sakai, had abandoned the economic security of his hospital job in Nagoya to avoid an arranged marriage. In California, the young couple lived in several homes, including in Downtown Los Angeles, La Jolla, and finally, Glendale, where they lived with Yuki’s parents, Asakichi and Ura Kawakami, who rented a home in Glendale from Leslie Coombs Brand (the Missouri-born “father of Glendale”). In 1926, Fred was killed at the age of 42 by a motorist. Yuki Sakai opened Tokio Florist in 1929 with help from her brother, Saichi, and the family moved into a home on the property. The florist was popular with Hollywood entertainers of the day and regular customers included Bud Cort, Carrie Jacobs-Bond, Cecil B. DeMille, Deanna Durbin, Earl C. Anthony, Ginger Rogers, Greta Garbo, Joan Fontaine, Martha Raye, Mickey Rooney, Olivia de Havilland, Walt Disney, and Mae West — and her pet monkey).

On 19 February 1942, President Franklin D. Roosevelt issued Executive Order 9066, which ordered the deportation and incarceration of Americans of Japanese ancestry. The Sakais, Kawakamis, and roughly 120,000 other Japanese Americans were forcibly interned in concentration camps. Manzanar was one of sixteen such camps and was home to roughly 10,000 detainees. It was at Manzanar that Hawaiʻi-born Ukio Frank Kozawa, who served in the armed forces, impressed Sumiko with his treatment of her grandfather and other elders. Hawaiʻian-Japanese were interned at much lower levels, ironically, because they composed over one-third of that territories population, and imprisoning all of them would’ve been disastrous for overseas territory.

World War II ended in fall of 1945 and the last incarcerated Japanese-Americans were released the following spring. The Sakais found that their garden had been vandalized during their captivity but they repaired it and re-opened Tokio Florist. Frank and Sumiko later married and gave birth to a daughter, Susan Michiko Kozawa, in 1949.

Around 1960, however, the landowners gave the Sakais roughly a month’s notice that they were going to demolish the florist and build four 32-unit apartments on the property between Rodney Drive and Hillhurst Avenue. For a brief spell, the Sakais operated at a small shop on the other side of the boulevard.

Harrison Brigham had died at the Brigham Residence in 1957. Eunice made ends meet by renting the upstairs bedrooms — at the time to three Japanese businessmen. Sumiko approached Eunice about moving their operation into her home and they moved themselves and Tokio Florist into the home in the early 1960s. Eunice retired to Running Springs. 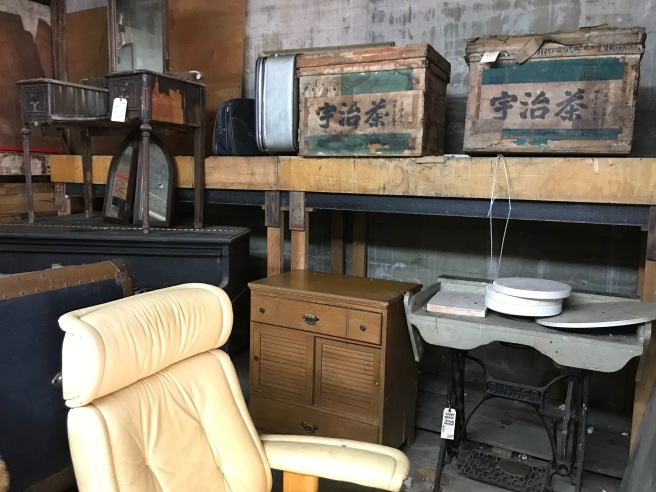 Yuki died in 1994. Frank died in 2007. I’m not sure when he and Sumiko officially retired but I first visited the shop right around that time. At some point, the gate seemed in front seemed to be permanently closed. Susan moved to Seattle years ago. Sumiko died in 2016 at the age of 100. When the estate sale was announced, I returned to the residence, mainly curious about the house’s interior and history.

It was my first estate sale and I found the experience a bit strange, to be honest. Dozens of people picked over the artifacts of someone else’s life, all on display and sale. The air upstairs was heavy and musty — smelling as it did of bodies, dust, old clothes, and vetiver. Outside, emanating from an unseen speaker in the parking lot was the joyous music of Mahmoud Ahmed. It was a bit like a combination of a wake, house party, and yard sale.

There were so many people crowding the rooms — poking and prodding boxes and piles in search of things to buy. There were, however, occasional moments in which a room would briefly empty and a fleeting sense of calm returned — hinting at what the house might’ve been like for much of its past.

The house was literally overflowing with objects acquired over several lifetimes. The long check-out line stretched down the driveway and moved at a snail’s pace. I hadn’t expected to purchase anything, desiring as I generally do to have fewer things in my home… but I nevertheless came away with a small tanuki figurine from Japan.

I wonder what will happen to this home now. It would be a shame if it was demolished. I could imagine it being tastefully transformed into a bed & breakfast or perhaps a restaurant. I doubt it will ever again be a single-family home or a florist again. If a new development is in the works, maybe it can be moved once again.