Isidore Ducasse was an Uruguayan-born Decadent poet, born on this day, 171 years ago. His only completed work, a collection of poetry titled Les Chants de Maldoror and Poésies, was largely overlooked during the author’s short life but later championed by the members of several underground movements. For its publication, Ducasse used the nom de plume for which is is widely recognized, Le Comte de Lautréamont. He died at the age of 24.

Isidore-Lucien Ducasse was born 4 April 1846 in Montevideo, Uruguay. His father, François Ducasse, was a French consular officer. His mother was Ducasse’s wife, Jacquette-Célestine Davezac. He was baptized at the Catedral Metropolitana de Montevideo in 1847 and his mother died soon after of unknown causes (biographers have speculated both disease epidemic and suicide). He grew up speaking three languages: French, Spanish, and English. In 1859, he was sent to France where he schooled at the Imperial Lycée in the Gascon town of Tarbes. In 1863 he transferred to Lycée Louis Barthou in Pau, also in Gascony.

As a teenager he fell under the spell of authors including Adam Mickiewicz, Alfred de Musset, Charles Baudelaire, Edgar Allan Poe, Jean Racine, John Milton, Lord Byron, Percy Bysshe Shelley, Pierre Corneille, Robert Southey, and Sophocles. After graduation, he returned to Tarbes and decided to pursue writing. After briefly returning home to Montevideo, he moved to Paris in 1867 and enrolled at École Polytechnique, only to drop out shortly after in order to pursue writing full-time. Supported by his father, he lived on Rue Notre-Dame-des-Victoires in a hotel and spent most of his days in libraries. According to his publisher, he did all of his writing at night, sitting at a piano, and banging out notes as he wrote. 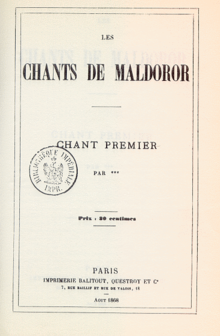 anonymously. He sent two copies to Victor Hugo, included with a letter in which he solicited the writer for advice as to further publication. A new edition followed in the anthology, Parfums de l’Âme in Bordeaux, published the following January, and credited to Comte de Lautréamont — inspired by the protagonist of Eugène Sue‘s gothic novel, Latréaumont (1837).

In 1869, Ducasse moved from 32 rue Faubourg-Montmartre to 15 rue Vivienne, then back to a hotel at 7 rue Faubourg-Montmartre. Whilst awaiting publication of Les Chants de Maldoror, he began work on a planned counterpart, which he never completed. When his first work was published, it went largely unnoticed, with only the Bulletin du Bibliophile et du Bibliothécaire even making reference to its publication in 1870. Ducasse published two installments of his follow-up as Poésies I and Poésies II which he sold for whatever buyers were willing to pay.

In July, Napoleon III declared war on Prussia. Prussian forces, in turn, captured the French emperor and besieged Paris. During the siege, living conditions worsened and Ducasse became ill (possibly with tuberculosis) and died in his hotel room on 24 November 1870. His body was hastily interred in a provisional grave at the Cimetière du Nord before being transferred in 1871 to its permanent resting place — for years assumed to be Cimetière parisien de Pantin — but now considered unknown.

Another revival of interest in Ducasse followed his rediscovery in 1917 by Philippe Soupault. After finding a copy of Les Chants de Maldoror in the math section of a bookstore, Soupault read it and passed it along to fellow Surrealist, André Breton, who was equally enthusiastic. The Surrealists ranked Ducasse with Baudelaire and Arthur Rimbaud in their canon. André Gide echoed their praise of the mostly forgotten poet. Breton and Louis Aragon located copies of Poésies in the Bibliothèque nationale de France and published them in their magazine, Literature, in 1919. In 1920, Man Ray created a piece called L’énigme d’Isidore Ducasse. In 1925, an edition of Le Disque Vert, was dedicated to Ducasse and Amedeo Modigliani was said to always carry a copy of Les Chants de Maldoror. For years after his death, no images of Ducasse were known to exist and so Félix Vallotton and Salvador Dalí pained imagined portraits of him.

In the 1970s, several biographical documents were found, allowing a few details of Ducasse’s life to be filled in. Two photographs believed to be of the author have so far

surfaced. Ducasse continued to inspire subversive art. In 1977, filmmaker ShujiTerayama directed a cinematic adaptation of Les Chants de Maldoror. In 1979, London-based industrial group Nurse With Wound referenced one of Ducasse’s most-quoted lines in the title of their debut, Chance Meeting on a Dissecting Table of a Sewing Machine and an Umbrella. In 1984, Kadour Naimi wrote the play, Maldoror, which he in turn adapted for film in 1997. Serge Gainsbourg’s 1990 song, “Et quand bien même,” included the lyrics:

Eric Brightwell is an adventurer, writer, rambler, explorer, cartographer, and guerrilla gardener who is always seeking writing, speaking, traveling, and art opportunities — or salaried work. He is not interested in generating advertorials, clickbait, listicles, or other 21st century variations of spam. Brightwell has written for Angels Walk LA, Amoeblog, Boom: A Journal of California, diaCRITICS, Hidden Los Angeles, and KCET Departures. His art has been featured by the American Institute of Architects, the Architecture & Design Museum, the Craft & Folk Art Museum, Form Follows Function, Los Angeles County Store, the book Sidewalking, Skid Row Housing Trust, and 1650 Gallery. Brightwell has been featured as subject in The Los Angeles Times, Huffington Post, Los Angeles Magazine, LAist, Eastsider LA, Boing Boing, Los Angeles, I’m Yours, and on Notebook on Cities and Culture. He has been a guest speaker on KCRW‘s Which Way, LA? and at Emerson College. Art prints of Brightwell’s maps are available from 1650 Gallery and on various products from Cal31. He is currently writing a book about Los Angeles and you can follow him on Facebook, Instagram, and Twitter.