On 15 October, Google paid tribute to Winsor McCay‘s comic, Little Nemo in Slumberland, which debuted on that date in 1905. It was a beautiful tribute to one of the greatest comic strips of all time. Just two days earlier, though not celebrated by Google (I don’t expect them to honor something every day), was the anniversary of another of my all-time favorite strips, Krazy Kat, which debuted in 1913 — although some of the characters dated were introduced in George Herriman‘s earlier strip, The Dingbat Family.

Krazy Kat wasn’t widley popular although it was hugely influential and afforded serious criticism as early as 1924, when Gilbert Seldes‘s article “The Krazy Kat Who Walks by Himself,” was published. Fan and poet E. E. Cummings wrote the introduction to the first book collection of the strip.The Comics Journal placed it first on its list of the greatest comics of the 20th century. Charlie Chaplin, F. Scott Fitzgerald, Gertrude Stein, H. L. Mencken, Jack Kerouac, Pablo Picasso, and Willem de Koonig were also avowed fans of the groundbreaking series.

The series was set in a chimerical version of Coconino County, Arizona. The narrative concerned an abusive rodent, Ignatz Mouse, whose barrage of bricks directed at Krazy Kat’s cranium were mistakenly interpreted by the Kat as symbols of the mouse’s love. Later, Offisa Bull Pupp was added to the mix, a canine police officer representing Coconino County’s arm of the law. Offisa Pupp, meanwhile loved the oblivious Krazy Kat and therefore naturally despised Ignatz.

The art was inspired by surrealism and the characters spoke in highly alliterative “Yat” — a dialect particular to Herriman’s native New Orleans. Herriman’s unwillingness to conform to comic strip conventions puzzled many readers and possibly hindered its acceptance — but the strip had a very powerful fan in publishing magnate William Randolph Hearst.

Krazy Kat was created by George Joseph Herriman. Herriman was born 22 August, 1880 into a New Orleans Creole family. When George was still young, the Herrimans move to Los Angeles, where he graduated from high school in 1897. Herriman was often described as quiet and guarded about his private life. His birth certificate listed his race as “colored” but once he lived in Los Angeles he “passed” and was nicknamed, “The Greek.” He made a point of never being photographed without his hat.

His first job was illustrating and engraving for a The Los Angeles Herald. Three years later he hoboed to New York where Hearst and Pulitzer were courting cartoonists for their publications. His first cartoon was published on 15, 1901 in Judge magazine. In 1902 he created his first regular series, Musical Mose. Professor Otto & His Auto (1902), Major Ozone’s Fresh Air Crusade (1904), Gooseberry Sprigg (1909) and others followed. His earliest acclaim came in 1904, with a piece on him, Richard F. Outcault (Buster Brown) and Jimmy Swinnerton (Little Jimmy) that was published in the literary magazine, Bookman. 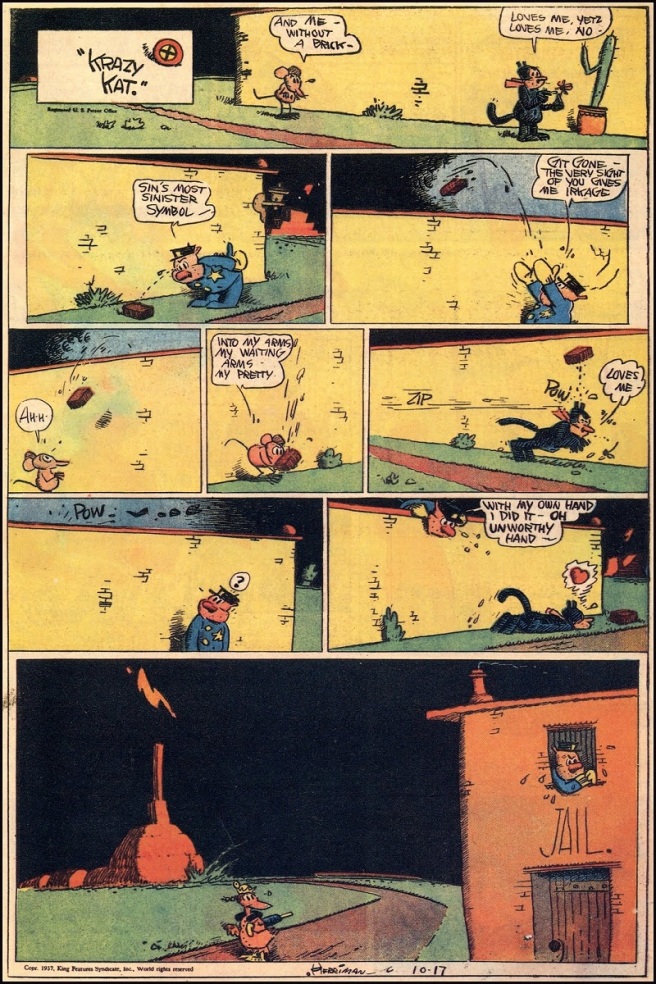 His best known character, Krazy Kat, was introduced in The Dingbat Family (aka The Family Upstairs) in 1910. Krazy got her (or his — the gender is never clear) own strip in 1913. More than any of his previous strips, it truly challenged comic strip conventions and, although never hugely popular, was adored by many intellectuals of the time. In 1916 it was expanded from a weekday series with the addition of a Sundaystrip. The Sunday comic was published in full color beginning in 1935, even as fewer papers continued to carry it.

By most accounts, Krazy Kat was Herrimnan’s life. He occasionally contributed illustraions to Don Marquis‘s stories and poems about Archie and Mehitabel, and sometimes painted and sculpted.

In 1916, Hearst produced the first animated Krazy Kat through his Hearst-Vitagraph News Pictorialcompany, albeit without Herrminan’s involvement. He continued making them through International Film Service. In 1920, a second series of Krazy Kat cartoons was produced by John R. Bray’s studio, Bray Productions. In 1922, at Hearst’s beckoning, John Alden, produced and scored a jazz ballet based on the strip that was positively reviewed in The New York Times and The New Republic and played to sold-out crowds on two nights.

In 1925, Bill Nolan made a series of Krazy Kat cartoons for prominent animation distributor, Margaret J. Winkler, that mostly broke with Herriman’s story in significant ways, for example, assigning Krazy a gender (male), turning his cat’s affections to Kwakk Wakk, and generally attempting to make Krazy Kat more like Felix the Cat. New directors Ben Harrison and Manny Gould were brought on board and by 1927, they called the creative shots. Winkler’s husband, Charles B. Mintz eventually became involved and, beginning with 1929’s “Ratskin,” began producing the cartoons in sound. In 1930, he and the staff moved to California and changed the design of the series further in an attempt to emulate Mickey Mouse. In 1939, Mintz sold his studio to Columbia Pictures, with whom he was in debt. The studio, under the name “Screen Gems,” produced one final Krazy Kat cartoon, “The Mouse Exterminator” in 1940. 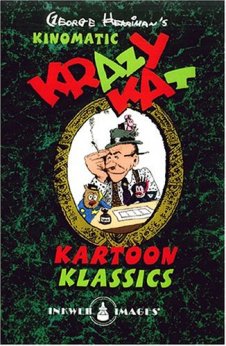 Herriman continued drawing the strip until his death on 25 April, 1944. The final strip was published exactly two months later.

In 2004, Inkwell released the DVD, George Herriman’s Kinomatic Krazy Kat Kartoon Klassics, which included a 45 minute documentary about Herriman and several of the earlier animated shorts.

Between 1962 and 1964, King Features produced fifty Krazy Kat cartoons, mostly at Gene Deitch’sRembrandt Films in Prague (where some of the most bizarre Tom & Jerry cartoons had just been produced). The remainder were produced at Sydney, Australia’s Artransa Film Studios. This version hewed fairly closely to the original. Most of these were collected on the Koch DVD, The Krazy Kat Kartoon Kollection (2003).

Although I’m not aware of Krazy Kat being credited as an inspiration, it seems impossible that Chuck Jones‘s Wile E. Coyote and Road Runner shorts or William Hanna and Joseph Barbera‘s Tom and Jerry seriescweren’t largely inspired by Herriman’s work. Mutts–creator Patrick McDonnell co-wroteKrazy Kat: The Comic Art of George Herriman. Bill Watterson (Calvin and Hobbes), Charles M. Schulz (Peanuts), and Will Eisner (The Spirit) all credited Herriman’s work too. I could be totally wrong but I detect a little Krazy Kat in everything from the comic strip Outland, to the sitcom Get a Life, to the oeuvre of Kim Ki-duk (김기덕).
So here’s to Krazy Kat, dahlink!