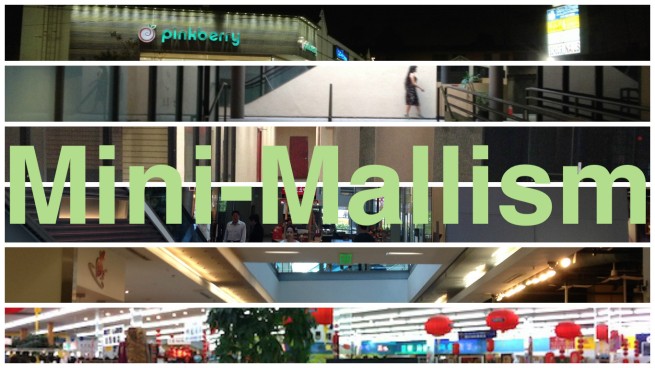 Strip malls (also called mini-malls, pod malls, power centers, retail parks, shopping centers, and shopping plazas) and malls in general are symbols of suburbia that although overabundant are rarely paid much attention. I find them interesting, however, mainly because I’m amused by their often pretentious names and ornamentation which I guess is designed to elevate their meager sense of place. More importantly, they’re also often home to the best restaurants in town. However, as poorly-designed vestiges of a vanishing car-dependent era, even the best strip malls are increasingly faced with either demolition or better yet, adaptation. As the great Ted “Theodore” Logan once said, “Strange things are afoot at the Circle K.” I will investigate these strange things in the series, Mini-Mallism.

At the western corner of the intersection of Hyperion and Rowena avenues in Los Feliz stands a small strip mall which apparently has no name but the address of which is 2829 Hyperion Avenue. It is not a particularly interesting shopping center but it is one of the closest to Pendersleigh, my home.

2829 Hyperion Avenue was built in 1986 on a lot formerly occupied by a gas station — back then one of four on a two block stretch. On the surface, the demolition of a gas station seems like a move away from car-dependency but its replacement with a standard, parking-lot-in-the-front pod mall was really an anti-pedestrian lateral move and was thus protested at the time by pedestrian advocates.

A spokesperson for the Canoga Park-based developers attempted to placate the pod’s opponents and told a reporter from the Los Angeles Times, “I agree that some centers are just thrown up, but we try not to put in anything distressful to the neighborhood.” They then pointed to the “peaked roof and [seafoam] green trim on exterior walls and railings,” flourishes which they described as “unsual.” As someone who remembers 1986, they were decidedly not unusual and there is no record of the architecture of 2829 Hyperion Avenue receiving either awards or compliments.

Directly across from the strip mall is Rowena Reservoir, which shortly after the construction of the strip mall emerged as another aesthetic battleground. The facility began life as the run-of-the-mill Ivanhoe Reservoir No. 2 and was later renamed Wilfred of Ivanhoe‘s wife, Lady Rowena. After algae blooms, midge fly infestations, and bromate contamination, all of Los Angeles’s reservoirs were ordered to be covered. Nearby homeowners again protested, some concerned not with the water’s cancer-causing chemicals (it’s piped, after all, to the neighborhoods west of Downtown and not to Los Feliz) but with a covered reservoir’s unpleasantness to behold. Compromise was achieved with the design and installation of an edenic, park-like garden — but one protected from the park-loving public not by cherubim or flaming swords but by a security fence.

When I moved to neighboring Silver Lake in 1999, convenience, poverty, and the existence of surprisingly few better options conspired to bring me to 2829 Hyperion Avenue’s then-present culinary anchor, Wok Avenue, a restaurant where metal troughs contained food purported to be Chinese in origin. If memory serves (and it might not — as memory-erasing substances also led be to Wok Avenue), other now-gone tenants included Vamp Shoes, High-Q 30 Mins Photo & Video, and Silverlake Sun, the latter offering those deprived of their bromate a cancerous alternative or the option of actually being painted the desired shade of tangerine.

Some of the tenants from back then are still there: Bonsoir Nails (from whence I received my only professional pedicure) and Catts & Doggs, a pet store. The shopping center is currently also home to Bliss Massage, Cha Acupuncture & Herbs, Optical Solutions, The Village Vet, and a Pinkberry.

The Pinkberry arrived on a tangy wave of hype during the great FroYo craze of the mid-2000s, replacing Wok Avenue, which joined Cams, Pulsar Communications Center, and Zitko Machine Services in the shopping center’s graveyard. When Pinkberry arrived, shocking numbers of food trendies formed long lines that snaked down the wheelchair ramp — something which never happened at Wok Avenue. Nowadays, although still popular, the wait for that chain’s particular brand of not-exactly-yogurt is not nearly so long.

There are signs of  pedestrians returning to the corner, or at least aspiring actor Rik Martino, a longtime fixture of East Hollywood and the Mideast Side who is known for posting signs around town admonishing motorists to slow down for the sake of squirrels and who tosses off handfuls of birdseed — acts which have earned him the nicknames of both “Squirrel Guy” and “The Birdman of Silver Lake” as well as the adoration of flock of feral pigeons, two of whom alit from the shopping center’s green-trimmed, white cinderblock wall as I approached.

*****
Eric Brightwell is a writer, rambler, explorer, cartographer, and guerrilla gardener who is always seeking writing, speaking, traveling, and art opportunities. He is not interested in writing advertorials, clickbait, or listicles and jobs must pay more than slave wages as he would rather write for pleasure than for peanuts. Brightwell’s written work has appeared in Amoeblog, diaCRITICS, and KCET Departures. His work has been featured by the American Institute of Architects, the Architecture & Design Museum, the Craft & Folk Art Museum, Form Follows Function, Los Angeles County Store, Skid Row Housing Trust, and 1650 Gallery. Brightwell has been featured in the Los Angeles Times, Huffington Post, Los Angeles Magazine, LAist, Eastsider LA, Boing Boing, Los Angeles, I’m Yours, and on Notebook on Cities and Culture. He has been a guest speaker on KCRW‘s Which Way, LA? and at Emerson College. Art prints of his maps are available from 1650 Gallery and on other products from Cal31. He is currently writing a book about Los Angeles and you can follow him on Facebook, Instagram, and Twitter.