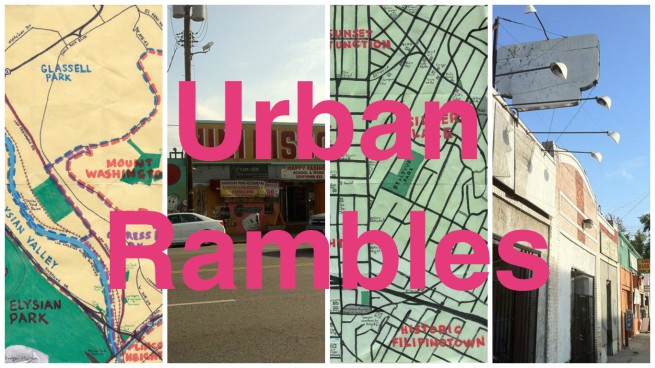 In this — my tenth year of exploring, writing about, and mapping Los Angeles — I’ve so far eschewed undertaking my fairly exhaustive (and completely exhausting) community explorations for which I’m probably best known, California Fool’s Gold. Instead, I’ve preferred to undertake smaller, less structured “rambles” though the city accompanied by fellow explorers. For this edition, I explored Mid-City with my friend Machiko Yasuda.

I met Machiko last year, at a 3rd of July party. It quickly transpired that we had several things in common including an interest in maps and the same exact same Shiba Inu key caps. Machiko also informed me that she was also the co-organizer of a Meetup called “MaptimeLA.” I’d just signed up for that service after it was recommended to me by an acquaintance to whom I expressed my unfulfilled desire to go camping on the Channel Islands. MaptimeLA’s next meet-up, it so happened, was a camping and mapping trip to Santa Catalina. Sadly, Machiko wasn’t able to make that trip (on which we mapped nearly every street in Avalon for Mapillary) but we’ve both continued to be involved with MaptimeLA and, not long after moving to Mid-City, she suggested that we explore it together.

Potential questions a neighborhood explorer might pose is “where is Mid-City?” Its name certainly suggests somewhere in the middle of the city, but where exactly? Does it have agreed upon borders? Is it a neighborhood, a district, or both? Is it the same as Midtown? Does it encompass all or parts of Mid-City West and Mid-Wilshire? I expressed some of my geographic uncertainties to Machiko but neither of us arrived at definite answers. My personal feeling is that that is OK — and that anyone who claims that there are absolute, official borders should at the very least be regarded with suspicion.

Historically, “Mid-City” is a vague description that has been applied to the central areas of many cities for at least a century. In Los Angeles County, “Mid-City” has been applied to the central areas of Montrose, Santa Monica, and Walnut Park — in addition to the city of Los Angeles. Los Angeles’s borders only began to move in 1896, 115 years after its establishment. As it gradually crept west, so to did the city’s midsection. The Westside only reached the Pacific Ocean in 1915 — but I’ve thus far been unable to find any reference to Los Angeles’s middle area until two decades later.

Like the term “Downtown,” “Midtown” was imported from New York City, where it was first coined around 1930. It spread quickly to Los Angeles, where it was used to refer to the area surrounded by Hollywood, South Los Angeles, Mideast Los Angeles, and the Westside as “Midtown” at least as early as 1935. Midtown would later be subdivided into more manageable subsections. By 1941, there were references to the area surrounding what’s now Koreatown as “Wilshire Center.” The earliest usage I’ve been able to find of “Mid-Wilshire” dates to 1969. The earliest reference to Mid-City Los Angeles that I’ve thus far located is from 1968. “Mid-City West” seems to have been coined around 2001, seemingly to realign those Midtown neighborhoods with the Westside for reasons I’ll leave it to the reader to figure out.

Although people will squabble about “official” definitions and borders, I haven’t found any two organizations or Angelenos with matching definitions of Mid-City. Although all overlap, The Los Angeles Times, Los Angeles Department of Transportation, Google, the Mid-City Neighborhood Council, and my own Pendersleigh & Sons Cartography all have different definitions of the neighborhood/region. AirBNB‘s website describes Mid-City as “Downtown adjacent” — and yet their own map shows it to be not adjacent to any downtown except that of Culver City. Many definitions include some combination of Balkanized, pocket-sized, micro-neighborhoods demarcated by a host of apparently DIY signs like Lafayette Square, Pico del Mar, Pico Park, Victoria Park, Wellington Square, Wilshire Highlands, Wilshire Vista Highlands. In fact, in no other region of Los Angeles are old tract names being revived at such a furious pace.

There is one part of Mid-City which has remained incontestably Mid-City because, I suspect, tract names like Tract No. 558, 569, 1740, 4448, 4889, 5091, 5770, 5955, 6035, and 11723 just wouldn’t look good on signs. There are other options for naming neighborhoods — without resorting to a “Naming Neighborhoods Project.” Some neighborhoods are named after parks — but there are no parks within this area that rise above the designation of “pocket park” — and no neighborhood has thus far been named after a pocket park. Some neighborhoods are named after prominent street intersections, but I suspect that “Redondo-Washington” or “21st-Rimpau” just aren’t sufficiently melodious… so Mid-City it remains by default. Note to neighborhood Balkanization proponents — Arlington Heights Terrace — subdivided in 1906 — is still waiting to be revived!

The West Boulevard Overpass (or West Boulevard Bridge) is, perhaps, an unlikely icon of Mid-City. The 39 meter-long arch bridge, built in 1933, is pretty but modest. It was originally used by pedestrians to walk over Pacific Electric Railway‘s (PE) train tracks used by the Venice Short Line (1903-1950) and Santa Monica via Sawtelle Line (1911-1940). In 1913, two trains collided near the intersection of Pico and Venice boulevards, killing fourteen and injuring about 200, prompting PE to replace wooden trains with steel ones. After the trains ended service, public stairways were fenced off and sidewalks sliced away as part of a city-wide surrender to automobile dependency. In 2013 it was designated Los Angeles Historic-Cultural Monument No. 1023. If that’s not enough information for you, Chin Thammasaengsri made an hour-long video about the bridge (in parts 1 and 2).

We stopped at Pacific French Bakery, which seemed to be quite popular as there was a pretty substantial line of customers picking up treats. We also passed La Usuluteca, which I feel obligated to shout out in fairness to the also-popular competition.

We popped into the Underground Museum, co-founded by artist Noah Davis, who died of cancer at just 32, and his wife, Karon Davis. It’s not a museum, in the usual sense, nor really an art gallery, it seems. There’s an outdoor space where people hang out, practice yoga, hear storytelling, or watch films. It reminded me a bit of the Velaslavasay Panorama, near the campus of USC.

Our final stop was St. Elmo Village, a small collection of bungalows built for farm workers between 1913 and 1926. In the 1960s, Rozzell and Roderick Sykes, an uncle and nephew, respectively, moved there. In 1969, with the help of other artists, they transformed the lot into an art space called St. Elmo Village. We came in search of hand-drumming but heard none. As we were leaving, we were met by Jacqueline Alexander-Sykes, who explained that the drumming hadn’t happened on account of the whims of drummers. Ms. Alexander-Sykes welcomed Machiko to the neighborhood and told us to come back anytime, and with that, we concluded our ramble! 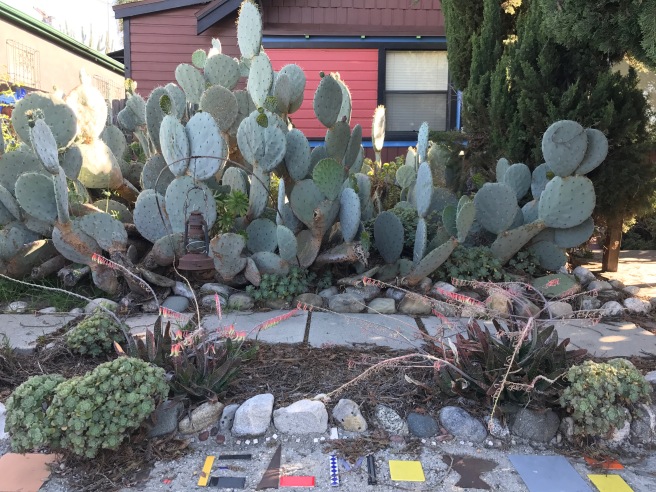 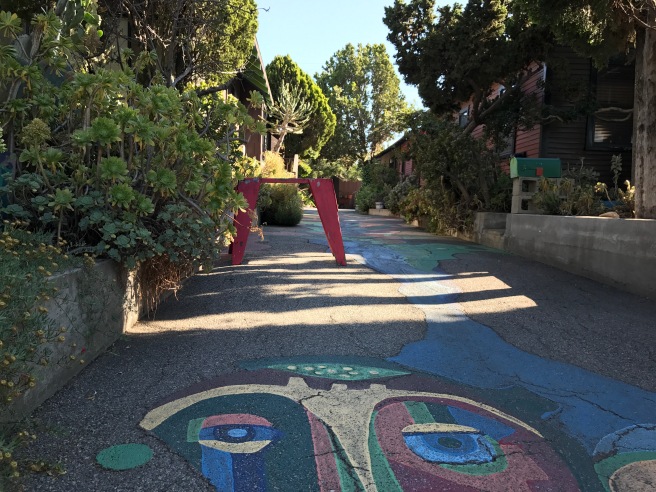 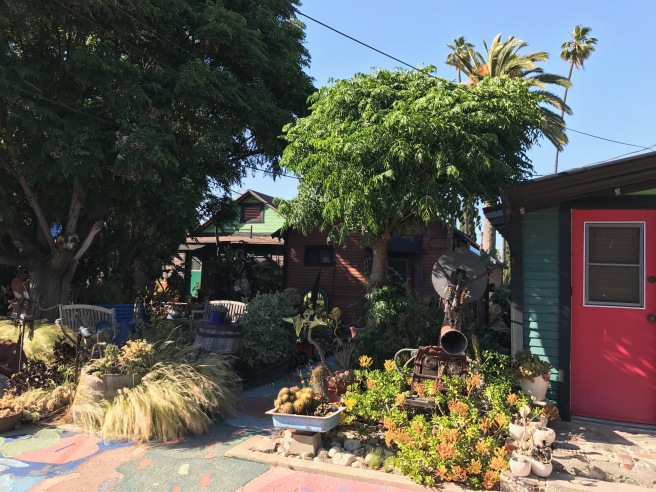 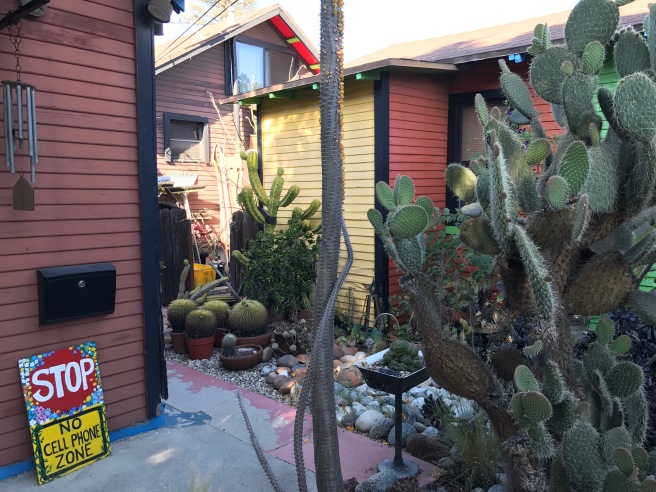 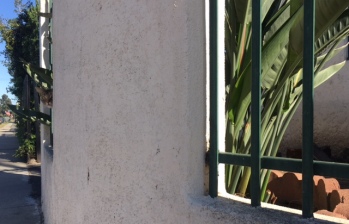 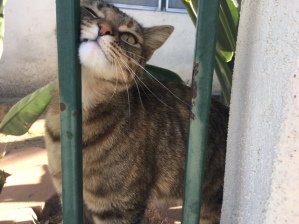 This is my territory (Image: Machiko)

Eric Brightwell is an adventurer, writer, rambler, explorer, cartographer, and guerrilla gardener who is always seeking writing, speaking, traveling, and art opportunities — or salaried work. He is not interested in generating advertorials, clickbait, listicles, or other 21st century variations of spam. Brightwell has written for Angels Walk LA, Amoeblog, Boom: A Journal of California, diaCRITICS, Hidden Los Angeles, and KCET Departures. His art has been featured by the American Institute of Architects, the Architecture & Design Museum, the Craft & Folk Art Museum, Form Follows Function, Los Angeles County Store, the book Sidewalking, Skid Row Housing Trust, and 1650 Gallery. Brightwell has been featured as subject in The Los Angeles Times, Huffington Post, Los Angeles Magazine, LAist, Eastsider LA, Boing Boing, Los Angeles, I’m Yours, and on Notebook on Cities and Culture. He has been a guest speaker on KCRW‘s Which Way, LA? and at Emerson College. Art prints of Brightwell’s maps are available from 1650 Gallery. He is currently writing a book about Los Angeles and you can follow him on Facebook, Instagram, and Twitter.