Alhambra is a suburban city located in the western San Gabriel Valley. Alhambra’s name was derived from Washington Irving‘s book Tales of the Alhambra, itself inspired by the author’s trip to the Alhambra palace in Granada, Andalusia. Alhambra emerged in the 1880s and incorporated on 11 July 1903. As of the 2010 census the population was 83,089. Alhambra has gone through several key demographic shifts which have contributed to it being one of the San Gabriel Valley’s most vibrant communities. In the 1940s it received a wave of Italian immigrants; followed by a wave of Mexicans in the 1960s; substantial numbers of Taiwanese arrived in the 1970s and ‘80s; more recent immigrants have included Chinese, Vietnamese, and Cambodians. As of the 2010 it had a demographic composition of 53% Asian-Pacific Islander, 10 % non-Latino white, 2% black, 1% Native American, 13% other race, and 4% mixed race. Latinos of any race composed 34% of the population. The majority of Alhambra residents were born overseas — usually in either China or Vietnam.

In 1874, “Don” Benjamin Davis Wilson bought 111 hectares of land. He subdivided the property and named the planned community “Alhambra” on the suggestion of his then ten-year-old daughter, Ruth, was reading Irving’s 1832 collection of essays, Tales of the Alhambra. Inspired by the book, the initial five streets of the community were named Alhambra, Almansor, Boabdil, Vega, and Granada. Boabdil proved to be a tongue twister for many of the suburbs Anglo residents and was thus changed to the more easily pronounced “Main Street.” 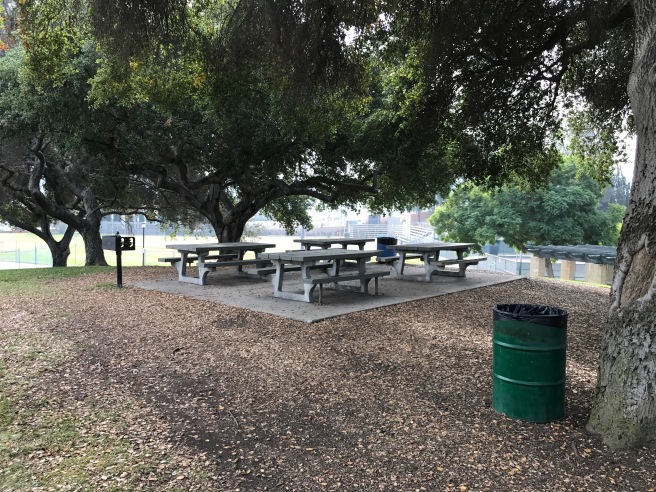 Granada Park was previously part of the Midwick Country Club, established in 1912, the 84 hectares of which used to sprawl across parts of what’s now Alhambra and Monterey Park on gentling rolling hills previously grazed upon by sheep. It was an exclusive club which hosted the likes of Alfred Hitchcock, Bing Crosby, David Niven, Gen. George Patton Jr., King George V of England, Hal Roach, Spencer Tracy, Walt Disney, and Will Rogers.

It did not host anyone who wasn’t “white.” When Dominic “The Banana King” Jebbia (né Domenico Gebbia) applied he had the $3,800 initiation fee (about the cost of a house at the time) but as an Italian immigrant was “not-quite-white.” He was thus denied admission and things continued as usual. The club’s polo team, the Midwick Foursome, won the national polo title in 1924. The Great Depression struck in 1929 and the elite country club wasn’t immune. After defaulting on a loan, the club was put up for sale in 1941. Its buyer was Jebbia, who dropped $178,000 in cash, according to him, “to preserve the view” from his hilltop mansion and seven hectare property on Fremont Avenue.

Jebbia changed its name to the Southern California Golf Club and opened the doors to “anyone of good character.” He referred to the golf club as his “backyard” and hung out at the ninth hole, smoking cigars, selling hotdogs, and probably feeling quite pleased with himself.

On 3 May 1944, a fire destroyed the club’s Colonial-style clubhouse.  Jebbia sold 73 hectares to developer Charles M. Cooper, who managed the course for four years. The rest of the land was donated to Alhambra, who established the park. Jebbia died in Sun City, California in 1974.

Granada Park packs a lot of punch into its mere seven hectares. There’s a playground, tennis courts, a swimming pool (the Granada Park Swim Complex), a baseball diamond, basketball courts, table tennis, picnic tables, shelters, and grills. I didn’t go in the public restrooms — which look interesting from the outside — but the apparent state of cleanliness are the reason given for the reduction of stars on several Yelp reviews.

The Santa Monica Freeway is just three kilometers away and a steady stream of low flying jets pass overhead. There were also plenty of chirping phoebes and quite a lot of squirrel combat. All told, however, it was still rather tranquil. There were almost no other people in the park; a mother and child occupied the playground, an elderly couple walked along the paved path and the woman concluded their journey with dance-like exercise as the man walked around patiently. For the duration of my exploration a groundskeeper tended to the park’s sign (which, out of respect, I’ve uncharacteristically not photographed). 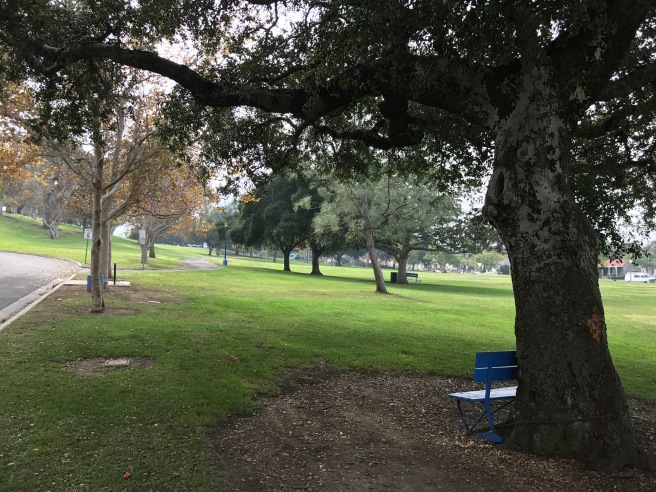 The park is gently sloped, covered with grass and mature shade trees of various species. As with all Alhambra parks, no dogs are allowed, nor is smoking tobacco. Signs also note, “for your safety,” that alcohol, littering, cycling, and amplified music are also prohibited — although it’s hard to imagine any of those besides alcohol consumption having a potentially deleterious effect on one’s well being.

Alhambra is decidedly underserved by public transit. There are only two lines of Alhambra Community Transit (ACT) covering the 20 km2 suburb. A single route each of Monterey Park’s Spirit Bus lines and Montebello Bus lines serve the community. Four Metro bus lines serve the suburb but Metro’s Silver Line passes through without stopping — even though a station at the juncture of Alhambra, Monterey Park, Rosemead, and San Gabriel would surely be a natural transit hub for Los Angeles’s Far Eastside. The only public transit which could be described as serving the park is Metro’s 258 line, which connects Paramount to Altadena and passes through South Gate, Bell Gardens, Commerce, East Los Angeles, Monterey Park, Alhambra, South Pasadena, and Pasadena. The nearest train station is located 3.7 kilometers aways in University Hills. Taking public transit from my place in Silver Lake involves a transfer and takes over an hour, so I did the sensible thing and rode my bicycle, Cream Soda. Luckily, there’s a single, small bicycle “wave rack.” 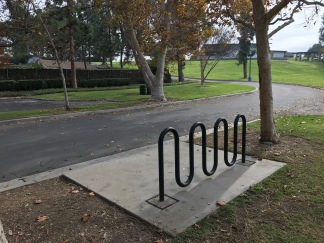 Are these bicycle racks?

Although Almansor is bigger (and Alhambra Park is where I learned to play tennis), Granada Park is a fine community park, especially if you find yourself in car-dependent Southwest Alhambra. However, unlike central Alhambra, there’s not much else in the area besides mid-20th century houses, a handful of churches, automobile maintenance shops, and a few uninspiring strip malls. If you’re in the area, in other words, the park is the star.