In the 1990s, when people still primarily consumed music by via aluminum compact discs, rap label No Limit Records rose to national attention in part by flooding shelf space with a seemingly endless number of releases by rappers whose albums were packaged in brightly colored cases, recognizable by their insane, perspective-defying artwork courtesy of Pen & Pixel, and musically blessed with the booming, groundbreaking production of Beats By the Pound. After its founder Master P signed a huge major label deal with EMI/Priority, No Limit became one of the biggest exporters of the Dirty South sound and forever transformed the sound of hip-hop, even if the label’s stay in the spotlight proved brief.

Master P was born Percy Robert Miller on 29 April 1967 in New Orleans. His younger brothers Corey Miller (C-Murder) and Vyshonn King Miller (Silkk the Shocker) are also rappers, as is his son Percy Romeo Miller (Lil’ Romeo). The other Miller siblings were Germany and Kevin — the latter of whom was murdered over a dispute involving drugs in 1990. The Miller family lived in The B.W. Cooper Apartments (better known as The Calliope Projects), a huge housing development constructed in 1941 in New Orleans’s Uptown.

In the late 1970s, after the elder Millers divorced, the Miller children split their time between the home of their paternal grandparents in New Orleans and their mother’s new home in Richmond, California. As a teenager, Percy pursued a career in basketball at Booker T. Washington and Warren Easton high schools and he won a sports scholarship to the University of Houston but his dreams of an athletic career were sidelined by a serious knee injury.

Following his injury, P studied business at Oakland‘s Merritt Junior College. His first attempt at music making was as the beat-maker for a Bay Area rap crew, XII Gauge and The Hit Squad. The same year, Percy and his wife Sonya gave birth to their son, whom they named Percy Romeo Miller Jr.

NO LIMIT — THE BAY AREA YEARS

Using the money from a malpractice suit following the death of his grandfather; P opened a record store called No Limit Records. As Master P, Miller formed the NWA-inspired gangsta rap act The Real Untouchables (or TRU) with his brothers, his wife, and friends Big Ed, Daniel Fry, King George, Fonzo, Milkman, and Markest “Magic Mark” Bank. The first release was four-track Mind Of A Psychopath, released 15 February 1990.

The label’s second release was Master P’s solo Get Away Clean, nominally a 12″ EP but in actuality more of a single, with “Richtown ’90’” as its flipside, and a track which again featured The Real Untouchables. The group’s early works were produced by K-Lou and recorded at K-Lou Studios, also in Richmond.

No Limit’s first official release (NLR-1001) was Master P’s 1991 debut full-length, Get Away Clean, credited to Master ‘P — also featuring The Real Untouchables. It was followed by the non-album single, “Jack Of The Jackers.” 1992 saw the release of The Real Untouchables’ “Hangin In The Hood,” “Christmas In The Ghetto,” and Understanding The Criminal Mind; as well as Master P’s “I’m Going Big Time” and Mama’s Bad Boy; and 1 Step Ahead Of Yall and “Ski $ CMT” — the latter by Oakland-based rapper EA-Ski (né Shon Adams).

1993 saw the release of The Real Untouchables’s “Tell Them What’s Goin’ On” b/w “Ghetto Is A Trap” and Who’s Da Killer?; EA-Ski’s “Straight Business“; Master P’s “Trust Nobody” b/w “I’m the Funkiest”; Sonya C’s Married To The Mob; and the Something Kind Of Funky EP, credited to a rapper known as Rally Ral.

NO LIMIT — THE NEW ORLEANS YEARS

After relocating to New Orleans, No Limit shed most of its roster. No Limit arrived in a New Orleans already lousy with talent including the rosters of local labels Big Boy, Cash Money, Take Fo’, Parkway Pumpin’, Tombstone, and Untouchable. Parkway Pumpin’, a label operated without contracts, had been the home to several rappers who would come to No Limit including Fiend, Mac (rebranded Lil Mac the Lyrical Midget), Mystikal Mike (by-then having achieved regional success as Mystikal over at Big Boy), the duo of Mr. Serv-On and Da Hound (from Da Gert Town Hounds/Full Blooded), and Magnolia Slim (better known as Soulja Slim). As talented as several of them were, perhaps no one deserves more credit for establishing No Limit’s southern sound as Parkway Pumpin’s producer, KLC.

KLC, born Craig S. Lawson, had grown up in the Melpomene projects (officially the Guste Apartments). His father played saxophone and Lawson, nicknamed “The Drum Major,” followed in his musical footsteps, playing in the Green Middle School marching band. His first co-production, with DJ Treble, was of MC J Ro J‘s “Ain’t Nuthin Nice” in 1988. With his friends Shack (né Derrick Mushatt) and MC Dart (né Dartanian Stovall), he formed 39 Posse, who were naturally the first group with a Parkway Pumpin’ release, in 1989. With Raymond “Mo B. Dick” Poole, Craig Bazile, and Odell Vickers Jr., Lawson formed the production crew Beats By the Pound, whose first commission for No Limit was the first double-rap CD, a compilation called Down South Hustlers — Bouncin’ And Swingin’ (Tha Value Pack Compilation).

1995 also saw the release of Master P’s “When They Gone” and 99 Ways To Die EP; Mia X’s “I Wanna Be With You” and Good Girl Gone Bad EP; Tre-8’s (Walter McCallon) Ghetto Stories; and Tru’s “Living That Life” b/w “I’m Bout It, Bout It” and TRU. 1996 saw the release of Silkk‘s The Shocker; Kane & Abel Feat. Master P & Mo B. Dick’s Gangstafied; the No Limit Gangsta Shit compilation; Skull Dugrey’s “Expression”; Kane & Abel’s The 7 Sins; and Master P’s “No More Tears,” “Bout It Bout It II,” and Mr. Ice Cream Man — the latter which became the last release of No Limit’s independent years as well as P’s first solo collaboration with Beats By the Pound and, not coincidentally, the label’s first platinum release.

In 1996, the Los Angeles rap label Priority Records had became part of London’s Electric and Musical Industries (EMI) and subsequently came knocking in New Orleans, where they signed a $30 million distribution deal with Master P in which he maintained ownership of No Limit’s master recordings and recording studio and EMI/Priority brought vastly-increased international exposure. 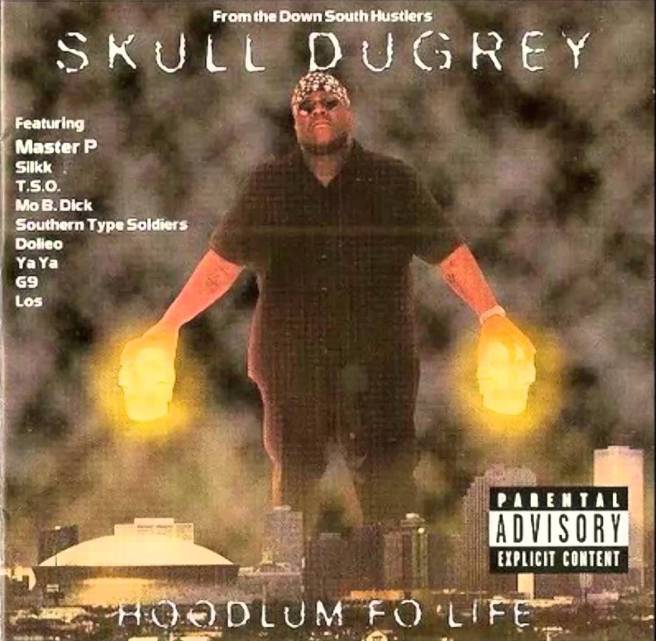 International fame didn’t come overnight. The first post-deal album was Skull Dugrey’s Hoodlum Fo’ Life, which failed to garner much attention outside of the South. Then TRU’s Tru 2 Da Game and Mia X’s Unlady Like both went gold in 1997.

Mystikal’s Unpredictable, containing the minor hit “Ain’t No Limit” went platinum. Master P‘s Ghetto D reached number one and produced three Master P hits, “I Miss My Homies,” “Make ‘Em Say Uhh!,” and “Burbons and Lacs.” After acrimoniously parting with Death Row, Snoop Dogg moved to No Limit. When Forbes Magazine reported Master P’s earnings at $56.5 million, making him one of the ten most highly paid entertainers of the year and yet, it’s safe to say that none of their readers had ever heard of him as No Limit made their money entirely without the support of MTV.

THE TANK BREAKS DOWN

When you would’ve expected No Limit to consolidate their hip-hop dominance, they instead seemed to expand their focus in all directions except music. In keeping with any moderately successful rapper of the era, No Limit created a requisite clothing line (No Limit Gear). They also entered the film industry with No Limit Films, including I’m Bout It, MP Da Last Don, Da Game of Life, I Got the Hook Up, Foolish, No Tomorrow, Uninvited, Hot Boyz, and Lockdown.

No Limit even operated a Foot Locker franchise, a gas station, a travel agency, a real estate company, a sports management company, and a phone sex service. P, meanwhile, auditioned for the Charlotte Hornets, the Toronto Raptors, and ultimately played with the CBA‘s Fort Wayne Fury. He even acted in a non-No Limit film, The Players Club.

In 1999, No Limit moved 22 million units but when it came to break bread, some of the artists voiced dissatisfaction with their shares. Most of the non-Miller roster soon jumped ship. Most disastrous of all, Beats By the Pound led the artist exodus (and changed their name to The Medicine Men), depriving the label of most of its best beat-makers. By 2000, the big names that remained were limited to the Millers, Mia X (then in the second year of a ten year recording hiatus), Magic, Mac, and Snoop Dog — not inconsiderable talents, mind you, and certainly better known than the label’s then-new signees Short Circuit, D.I.G., Young Gunz, Popeye, Baby Soulja, Black Felon, Afficial, Samm, Curren$y, Choppa, and Krazy. However, to anyone who was paying attention, the writing was clearly on the wall; it was now the age of Cash Money — and their Mannie Fresh-backed roster of Big Tymers, Hot Boys, Turk, Juvenile, B.G., and Lil’ Wayne.

LIFE (AND DEATH) AFTER NO LIMIT

Over the years, No Limit would reorganize and move from distributor to distributor but never recapture the magic of its heyday. Several of its former rappers had some pretty serious run-ins with the law. In 2001, Kane & Abel were sentenced to three years in a cocaine case after admitting to lying to federal agents about the activities of jailed drug kingpin and convicted murderer Richard Pena. Also in 2001, Mac was charged with the death of 22-year-old Barron C. Victor Jr. and sentenced to a 30-year term. In 2003, C-Murder was found guilty of beating and fatally shooting a 16-year-old fan, Steve Thomas, and sentenced to life imprisonment. In 2004, Mystikal was sentenced to six years in prison for sexual battery and was released in 2010, after which he returned to music, signing with his old rivals Cash Money in 2011.

Other former No Limit rappers are no longer of this world. Big Ed (Edward Lee Knight) died of cancer in 2001. Then-26-year-old Soulja Slim (James Tapp) was murdered in front of his mother’s home in 2003. Tre-8 died in a car accident in 2011, aged 37. Magic died in a car accident in 2013, aged 37. Most of the buildings of the Calliope Projects were demolished following their evacuation during Hurricane Katrina.

Mia X, Mr. Serv-On, Silkk the Shocker, and Snoop Dogg continue to compose and perform music, as does KLC, who as of 2013 was reportedly working on a collaboration with the one-and-only Rakim.