Although Sandra has sold over 30 million albums worldwide, she remains largely unknown in the Anglosphere — with the notable exception of the Vietnamese-American community. I was introduced to her as a “Vietnamese New Wave” singer which might understandably lead to confusion for the uninitiated. But just as the Northern Soul scene was refers not to the geography of any music production but rather its reception, Vietnamese New Wave stars are generally German or Italian, and popular in places like North Orange County’s Little Saigon, Rosemead, San Jose, Houston’s Vietnamtown (Sandra will perform in Houston on 30 April with Fancy, Lian Ross, and Ken Laszlo), Garland, and New Orleans’s 9th Ward.

Sandra is my favorite “New Wave” singer but I’m not the only non-Người Mỹ gốc Việt whose heard her voice on record. It was Sandra’s voice which whispered “Sade, dit moi,”“Sadeness (Part I),” a massively popular hit for her then-husband’s Enigma project. It’s a shame, however, that more people Anglos arent’ familiar with her many, sparkling hits, my favorites of which are “(I’ll Never Be) Maria Magdalena,” “In the Heat of the Night,” “Little Girl,” “Hi! Hi! Hi!,” “Loreen,” “Midnight Man,” and “We’ll Be Together” and all of which I’m assuming she’ll perform in Los Angeles and Dallas. It’s not to late to catch up, though, so here’s an introduction. 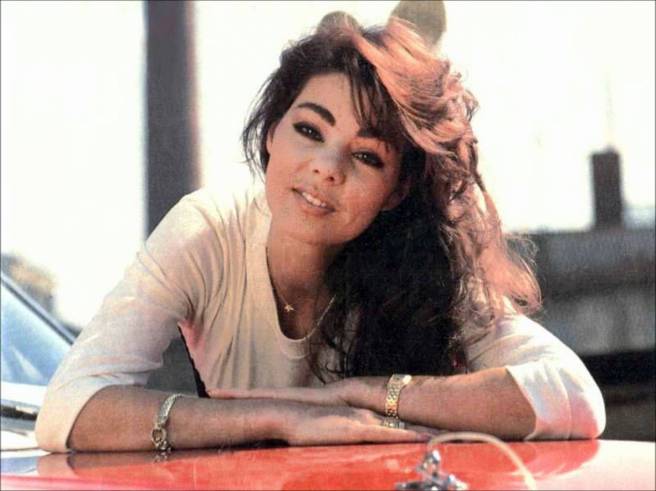 Sandra Ann Lauer was born 18 May 1962, in Saarbrücken, Germany. Her father, Robert Lauer, was French and her mother, Karin, German. When she was growing up, her father owned a wine shop and her mother worked in a shoe store. Sandra began ballet lessons when she was five and took up the guitar when she was ten.

In 1975, though not enrolled as a competitor, she nonetheless took the stage at a talent contest and sang a German cover of an Olivia-Newton John hit. Emboldened by the experience and supported by her parents and producer George Roman, she next recorded a schlager-disco single about her dog, “Andy Mein Freund,” which failed to generate measurable interest.

Sandra next joined Michaela Rose and Jasmine Vetter as the new lead singer in the pre-existing disco vocal group, Arabesque. In the process of recording their second album, City Cats, Sandra met her future husband, keyboardist Michael Cretu. Arabesque were particularly popular with Japanese and Soviet audiences but after recording seven albums in four years, Sandra left the group and the remaining duo continued as Rouge.

In 1984, Sandra and Cretu moved to Munich and recorded a German language cover of Alphaville’s “Big in Japan” titled “Japan ist weit.” Her full length debut, The Long Play (1985) spawned the hit singles “(I’ll Never Be) Maria Magdalena,” “In the Heat of the Night,” and “Little Girl.” Most of the albums songs were co-written by Cretu (who also arranged and produced), English lyricist Richard William Palmer-James, and Markus Löhr and Hubert Kemmler, both of German synthpop group Hubert Kah),

Sandra’s singles were massive hits in Brazil, Germany, Israel, the Netherlands, Norway, Sweden, and Switzerland but for the most part failed to break into the Anglosphere except in South Africa (where English is one of eleven official languages). In Hong Kong, gangtai (港臺) star Anita Mui Yim-fong (梅艷芳), the so-called “Madonna of Asia” released a Cantopop cover of “In the Heat of the Night,” titled “將冰山劈開.” More Chinese and Vietnamese covers followed whilst at the same time Sandra moved to London to improve her English and to take singing lessons.

Sandra’s follow-up, Mirrors (1986) featured “Hi! Hi! Hi!” and “Midnight Man.”  It was again arranged and co-produced (along with Armand Volker) by Cretu, who co-wrote the music with Kemmler and the Klaus Hirschburger, also of Hubert Kah. A year later, Stock Aitken Waterman (who’d adapted Eurodisco into a sound branded Eurobeat) remixed Sandra’s cover of “Everlasting Love” for the UK market but Sandra’s fanbase continued to exist outside the English-speaking world and “Everlasting Love” was a massive hit in the Philippines, South Africa and Sweden.

After several years of dating, Sandra and Michael Cretu married in 1988. Sandra’s third album, Into a Secret Land (again produced by Crete and co-written by Cretu, Kemmler, and Löhr), was released the same year and signaled a slight move away from the Eurodisco sound. The single, “We’ll Be Together,” however, would’ve been at home on either of her previous albums.

Paintings in Yellow (composed by Cretu, Hirschburger, Dave Morgan, and Frank Peterson) moved even further into a new direction, incorporating the influences of Gregorian chants which culminated in Cretu and Peterson’s music project, Enigma. 1992’s Close to Seven (written by Cretu) and 1995’s Fading Shades (co-written by Cretu and fellow Enigma member, Jens Gad) followed. The later was recorded whilst Sandra was pregnant with twins. Both signaled a decline in Sandra’s commercial viability but the birth of Nikita and Sebastian and ensuing time away from the studio suggested an understandable shift in the new mother’s priorities.

After seven years away from recording, Sandra returned in 2002 with The Wheel of Time, which consisted mostly of re-recordings of past hits. In 2007, Sandra released The Art of Love, produced by Gad and her first album in which Crete had no involvement. Instead, Sandra for the first time, explored songwriting with a cast of collaborators. Before the year ended, Sandra and Cretu began divorce proceedings. In 2009 Sandra returned with Back To Life, was again largely a Gad production. In 2010 Sandra married music producer Olaf Menges and the couple live in Ibiza, Catalonia. 2012’s Stay in Touch was produced by Cologne’s trance duo, Blank & Jones, and co-written by Gad, Susanne Sigl, and (for the first time since 1988) Hubert Kemmler.

Eric Brightwell is an adventurer, writer, rambler, explorer, cartographer, and guerrilla gardener who is always seeking writing, speaking, traveling, and art opportunities — or salaried work. He is not interested in writing advertorials, clickbait, listicles, or other 21st century varieties of spam. Brightwell’s written work has appeared in Amoeblog, diaCRITICS, and KCET Departures. His work has been featured by the American Institute of Architects, the Architecture & Design Museum, the Craft & Folk Art Museum, Form Follows Function, Los Angeles County Store, Skid Row Housing Trust, and 1650 Gallery. Brightwell has been featured in the Los Angeles Times, Huffington Post, Los Angeles Magazine, LAist, Eastsider LA, Boing Boing, Los Angeles, I’m Yours, and on Notebook on Cities and Culture. He has been a guest speaker on KCRW‘s Which Way, LA? and at Emerson College. Art prints of his maps are available from 1650 Gallery and on other products from Cal31. He is currently writing a book about Los Angeles and you can follow him on Facebook, Instagram, and Twitter.